So much for BRICS 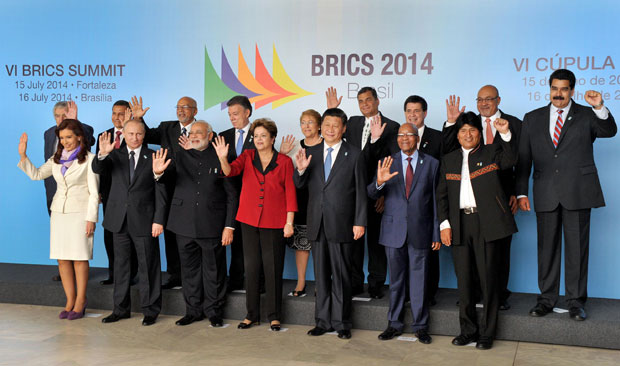 Ten years of hype and hope around the BRICS group of countries was fruitless and without any material gain, in so far as instilling institutional rigour. This is according to the second edition of the GIBS Dynamic Markets Index (DMI), released on Tuesday.

The DMI suggests that the emerging market group is an empty acronym and “little more than a clever marketing tool”, reflecting little progress for all the BRICS countries, with the exception of China. Other than the New Development Bank that was launched last year, nothing has come out of BRICS – no formalised collective strategic agenda, political cohesion nor collective institutional framework.

“China is really a standalone country in the BRICS configuration,” says Dr Lyal White from the GIBS Centre for Dynamic Markets (CDM). “India performed very poorly between 2010 and 2013, although it is starting to make a comeback right now. Russia, as we know, is probably the worst-performing country in the group. Brazil has experienced the largest amount of protests in its cities over the last two years.”

The index measures 144 countries’ institutional progress and overall advancement by measuring the improvement, or lack thereof, within six pillars of dynamic markets – namely: openness, level of red tape, socio-political stability, the justice system, macroeconomic management and human capital – from 2007 to 2014.

The DMI, which uses empirical data unlike many other indices that use surveys, scores countries between 0 to 200, to represent overall deterioration or improvement across the aforementioned pillars, with a score of 100 being the breakeven level between improvement and deterioration over the said period.

Almost 50% of all the countries had either regressed or remained static, meaning that institutions did very little to improve, or they went backwards. White says this suggests that the global political economy, over that period, has not made a significant or even a moderate recovery since the global financial crisis.

South Africa deteriorated, scoring 53.24 in the DMI, owing to questionable economic decisions by the government, impotent growth, a tumbling currency and high debt. But because of its high base of 141.44 in 2007, it fell into the static group according to the above diagram.

The biggest problem with this is that South Africa will fall behind in the competition for capital. White said, when investors are considering countries with similar perceived risk profiles, poor institutional improvements will swing their vote.

The same applies to Brazil, which scored 78 and has made a bit of a comeback since the last DMI was released.

“In 2014 it was an adynamic market, but has now become a static market. They have taken really progressive measures around social development, but those might not stick because Brazil has run out of money,” said White, adding that the lacklustre performance of Brazil has manifested itself in the possible impeachment of its president and other tumultuous socio-political developments.

India is a dynamic market, improving with a score similar to China’s of 117, albeit from a lower base. It and China, whose growth story has been supported by very good structural reform, are the only remaining hopes for BRICS.

Says White: “While we are quite critical of the drivers of growth in China’s economic model at the CDM, we can’t dispute the fact that they have put in place the right reforms. Education is a big driver in that economy…. The index speaks to the longevity of the Chinese growth story, even if it might be dropping to its lowest growth rates in 25 years.”

Science of Success: How to make the right financial choices
9 hours ago
9 hours ago

Science of Success: How to make the right financial choices
9 hours ago
9 hours ago