How does Telkom FreeMe stack up to FNB Connect?

It’s not as cut and dry as you’d think.

With competition among mobile operators when it comes to data-focused packages finally a reality, there are many, many South Africans carefully comparing options with a view to switching.

There’s no all-out price war just yet, as the three largest operators, Vodacom, MTN and Cell C, have not yet responded to Telkom’s move, announced last Thursday. For now, the comparisons with existing data-focused integrated packages aren’t that flattering and the big three are relying on temporary promotional pricing to at least make their prices seem less absurd.

Absent from Monday’s direct comparisons are any mobile virtual network operators (MVNOs), of which there are a handful in the country, including Virgin Mobile, Me & You Mobile, MRP Mobile and FNB Connect. Only the bank’s offering has aggressive data pricing, which means it is comparable to FreeMe.

FNB’s MVNO launched 13 months ago and uses Cell C’s network (like most of the others). It has three main differentiators: free WhatsApp messaging, data pricing (versus the other MVNOs who price in line with Cell C at R150 per GB) and eBucks rewards. Tying into the bank’s rewards platform means FNB Connect is able to effectively offer additional discounts to customers, depending on their reward level.

A Premier (or Private Clients) customer on eBucks Reward Level 5 will achieve a 40% “reward rate” on contracts, voice, data and SMS bundles and out-of-bundle rates. So, a 1GB data bundle (on its Flexi packages or bolted on) will effectively “cost” R39, versus the R65 base (cash) price in the above example (Premier, Reward Level 5). The 40% saving (R26 or eB260) will be “paid” to you in the form of eBucks at the start of the following month. One might argue, however, that the reward “discount” is somewhat abstracted as you’ll still be paying the base price, regardless.

The bank’s pricing guide is a lot less simple than it could be. For a start, pricing (both in the guide and in the Connect product section of its site) relies on lots of tables, given the different Rewards Levels (and bundle options). The “easiest” way to get a summary is to download (and make sense of) an 18-page PDF. This might be how you price bank transactions, but it certainly isn’t how human beings shop for and compare cellular pricing. An interactive tool would be far more useful….

That said, FNB Connect has had a solid start. The bank’s chief executive Jacques Celliers disclosed in mid-March that it had 200 000 active subscribers. As at June 30, 2015 (the last time it published this figure), the bank had 7.1 million customers, translating to penetration of under 3% across its entire base. At the mid- to higher-end, penetration is likely sitting closer to 10%.

And, although not an apples-with-apples comparison, Telkom reported 794 272 postpaid subscribers as at March 31, 2016 (with nearly 2 million active prepaid SIMs).

How do Telkom’s FreeMe packages compare to FNB Connect’s Flexi Voice and Data ones?

For a start, the Flexi packages require you to build it yourself. For the purposes of comparison, a Flexi contract with only added data was used. And in the “typical” customer example, it was assumed that the low level of voice calls and SMS usage would be out-of- bundle. This makes the comparison a little more representative, given that Telkom’s FreeMe is built specifically around data (it goes without saying that these packages only make sense and these comparisons are only valid if you use a lot of data every month). 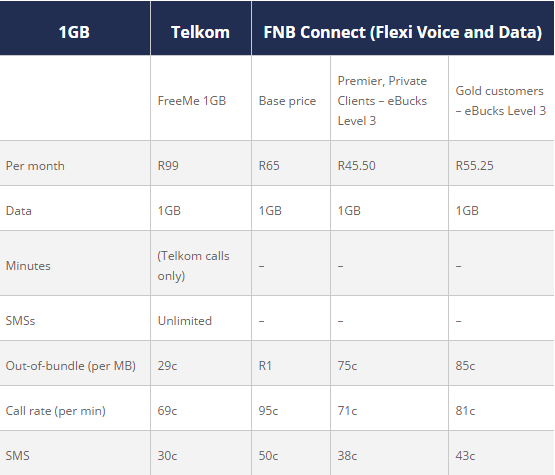 At a base price, and especially when factoring in eBucks rewards, FNB Connect wins hands down. But, this assumes zero out-of-bundle usage, which is not really realistic.

Let’s use an example of a “typical” customer who uses 1.1GB of data per month (ie, 100MB out-of-bundle), makes 38 minutes of calls, including 8 minutes to landlines and sends 10 SMSs.

On Telkom FreeMe 1GB, this would cost R148.70. On FNB Connect (base/cash price, not accounting for eBucks rewards) it would be R206.10. A Premier customer on Level 5 (the highest level and not the example used in the table above) would effectively “pay” R123.66, with them earning eBucks rewards worth R82.44 (eB824) at the start of the following month.

One might be tempted to argue that the FNB Connect customer should add voice or SMS bundles to try and offset the out-of-bundle rates, but these hardly impact the totals.

If this “typical” customer did not go out of bundle with their data usage, the monthly total would be as follows: Telkom FreeMe R119.70, FNB Connect R106.10. 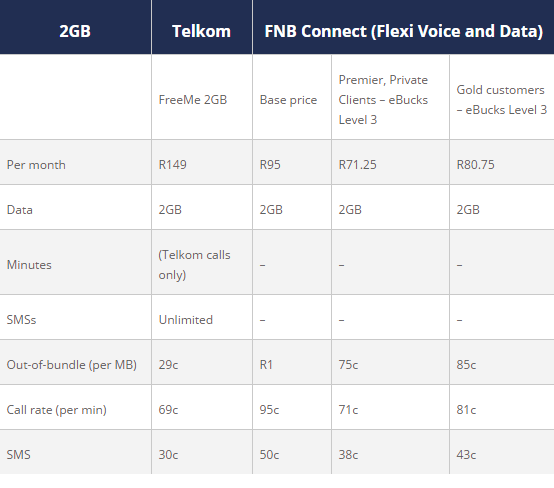 Again, let’s use a “typical” customer who makes the same amount of calls and sent the same number of SMSs as the first example (1GB comparison, above) and who also used 100MB out-of-bundle (on top of the 2GB allocation). On Telkom FreeMe 2GB, their usage would total R198.70, while the base/cash price on FNB Connect (not accounting for eBucks rewards) will be R236.10. 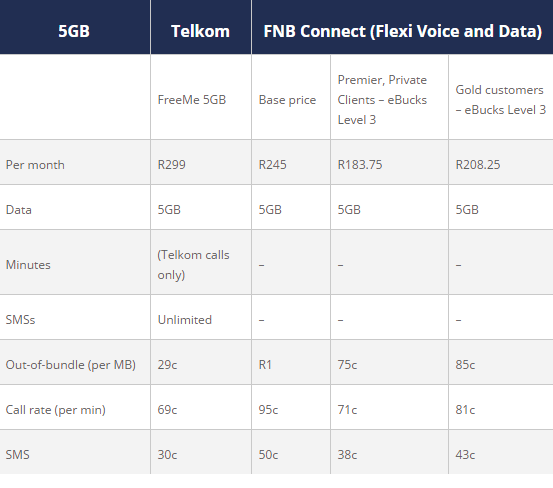 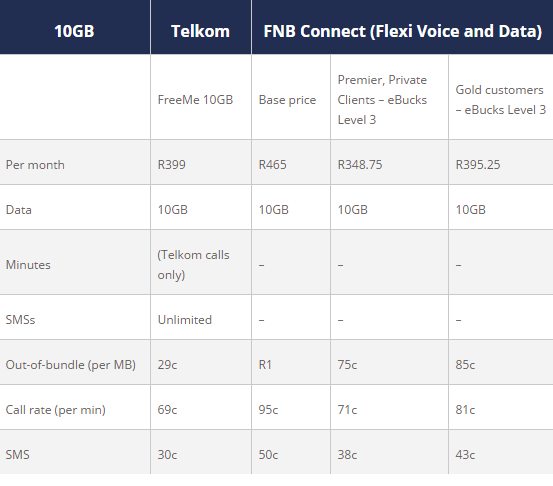 In both the 5GB and 10GB comparisons, FNB Connect compares less favourably with Telkom FreeMe. With some calls and SMSs, on the 5GB plans, you’ll probably end up with something close to a tie between the two. Even after taking into account eBucks rewards, there’ll likely be a tie when real-world usage comes into play.

On a heavy-usage 10GB plan, FNB Connect is pricier on the monthly base/cash price. A heavier “typical” user, who perhaps makes twice as many calls (76 minutes, with 16 to Telkom numbers) and sends twice as many SMSs (20) per month will see the following totals on the 10GB plans: R416.40 for Telkom FreeMe and R547.20 for FNB Connect.

But, when eBucks are taken into account, especially at the higher Rewards Levels (arguably a less direct comparison), FNB Connect is cheaper. At the Level 5, an FNB Premier customer would effectively pay R328.32 (as they’d earn eB2188 or R218.88 back). Note: there is no out-of-bundle data usage in this example as 10GB is a substantial amount of data.

In summary, FNB Connect is hindered by its pricey voice rates (regardless of whether or not these are in-bundle or not) and its even pricier out-of-bundle data rates. This means that any voice usage and/or any out-of-bundle data usage immediately swings the pendulum towards Telkom’s FreeMe plans.

If your choice comes down to these two options, FNB Connect makes sense if you:

Orchids and Onions: Misguided and 'crass' PR messaging is enough to bring tears to the eyes
3 days ago
3 days ago 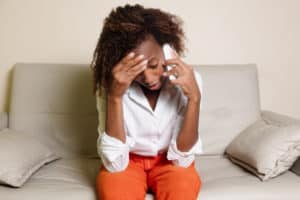 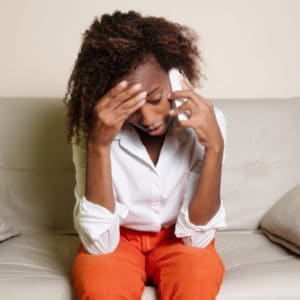 Orchids and Onions: Misguided and 'crass' PR messaging is enough to bring tears to the eyes
3 days ago
3 days ago