The number of South African US dollar millionaires has declined by roughly 4% over the last year to 45 000, largely on the back of significant rand depreciation.

This is according to the seventh edition of the Credit Suisse Research Institute’s Global Wealth Report, which provides an overview of global household wealth.

Antonios Koutsoukis, analyst for international wealth management at Credit Suisse, says the primary reason for the drop was the depreciation of the local currency.

The millionaire segment is a very small part of the overall population and it is typically fairly sensitive to changes in wealth, he adds.

A dollar millionaire is regarded as an adult with net wealth in excess of
$1 million. The calculation takes bank deposits, stock and bond holdings and pension fund assets (financial assets), land and housing (real assets) as well as mortgage and consumer debt (debts) into account. The mean wealth figure for South African adults is depicted in the graph below. “This is really what impacted the number of millionaires.”

Koutsoukis says while South Africa has around 0.7% of the world’s adults, it has 0.1% of the globe’s dollar millionaires.

South African wealth has not really recovered in dollar terms since the global financial crisis. While the average wealth per adult is up around 70% in rand terms since 2007, it has dipped roughly 20% since its 2007 peak before the financial crisis, he says. 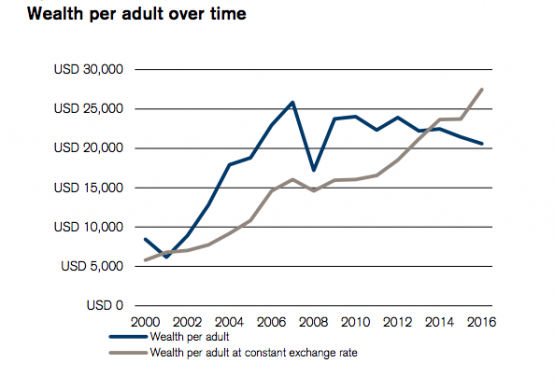 Personal wealth in South Africa largely comprises of financial assets, which contribute 65% to the household portfolio.

Koutsoukis says inequality estimates for South Africa have deteriorated since the global financial crisis, but the country is not unique in this respect. During the first part of the 21st century, inequality was trending down, but the trend reversed after 2008. Wealth inequality is largely at the same level as in 2000.

While the South African data is not perfect, it is “fairly decent” when compared to other emerging market countries, he says.