Gold miners Harmony and Gold Fields released financial results on Thursday while Sibanye issued a trading update. See a round up of all three below. 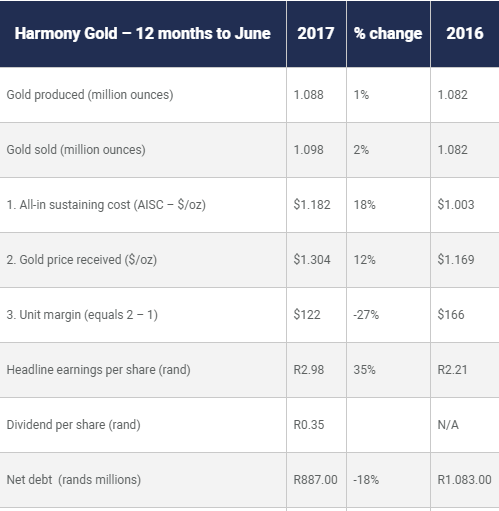 In the interview below, Harmony CEO Peter Steenkamp expands on the production plan at Hidden Valley following the four-month closure, and whether Harmony might acquire Tau tona from AngloGold Ashanti: 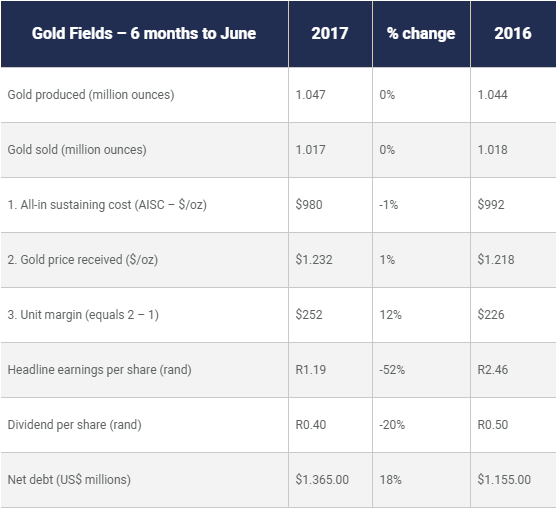 Gold Fields CEO Nick Holland takes listeners through some of the challenges at South Deep in the first quarter that led to the 15% fall in production at the mine. It was very interesting to hear his views on the attractiveness of South Africa as a mining destination – there will simply be no new investment because of the regulatory uncertainty over the Mining Charter:

The company notified the market that it will report an attributable loss of R4.8 billion for the six months ending June. The bulk of this is due to once-off charges for:

There is also the effect of the dilution of earnings as a result of the additional 1.195 million shares issued for the acquisition of Stillwater. Sibanye is expecting a loss per share of at least R3.20 per share, and a headline loss per share of R1.45.

Gold produced for the six months ending June was 8% lower when compared to June 2016 at 688 600 ounces. Operating costs increased by 3% to R8.923 million. The South African platinum group metals division delivered production of 590 000 ounces in line with expectations, while the newly-acquired US operations yielded 93 800 ounces for the two months it was under Sibanye ownership.

Search continues for five mineworkers trapped at Implats' Rustenburg mine
5 days ago
5 days ago
PREMIUM!

Search continues for five mineworkers trapped at Implats' Rustenburg mine
5 days ago
5 days ago
PREMIUM!