It was theft, not a protected disclosure, says O’Sullivan 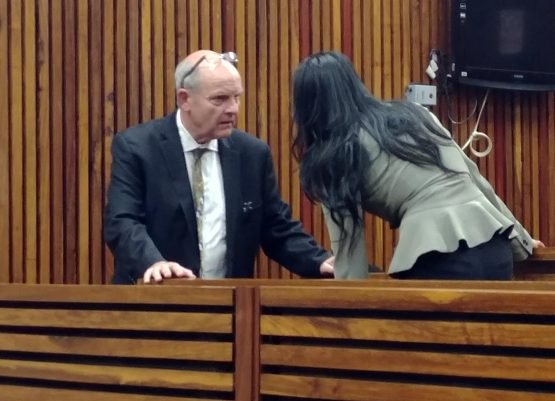 Forensic investigator Paul O’Sullivan on Wednesday disputed the state’s contention that the complainant in his kidnapping case made a protected disclosure about the wrongdoing of her employer, personal injury attorneys Ronald Bobroff and Partners (RBF).

O’Sullivan and his former assistant Melissa Naidu are on trial in the Randburg Magistrate’s Court for extortion, intimidation and kidnapping following their interview with RBF employee Cora van der Merwe on October 13, 2014.

Bobroff at the time contracted O’Sullivan to establish who the person was who leaked information from the practice to then Moneyweb journalist Tony Beamish and whether a case could be made against that person.

Van der Merwe had been identified as being responsible for the leaks and after O’Sullivan confronted her with copies of e-mails on the fateful day, admitted to sending information to Beamish.

Beamish wrote a series of articles about Bobroff over-charging victims of vehicle accidents whom Bobroff represented in claims against the Road Accident Fund. The exposés led to him and his son Darren being scrapped off the Roll of Attorneys. They subsequently fled the country and went to Australia to escape prosecution.

O’Sullivan on Wednesday confirmed that he knew about the Protected Disclosures Act at the time. He however disputed that Van der Merwe’s e-mails to Beamish qualify as protected disclosures under the act. He stated Van der Merwe committed the offence of theft.

He referred to the file of RBP client Des Steenkamp that he said Van der Merwe had attached in its entirety to one of her e-mails to Beamish. Bobroff represented Steenkamp in his claim against the RAF and O’Sullivan alleged that Beamish advised Steenkamp to contact Bobroff’s rival attorney, Anthony Millar of Norman Berger and Partners, regarding Bobroff’s over-charging. O’Sullivan said the information in the file was later used by Millar to institute a claim against Bobroff on behalf of Steenkamp.

He also referred to documentation prepared by Bobroff for the Law Society in his complaint against Millar for touting. He said the documents dealt with wrongdoing in Millar’s practice, not in that of Bobroff and therefore couldn’t qualify as a protected disclosure by Van der Merwe.

Prosecutor Jabulani Mlotshwa put to O’Sullivan a document headed “Practical Guidelines for Employees” regarding protected disclosures. He pointed out that such disclosures can be made by an employee, regarding wrongdoing of her employer, to a journalist among others.

O’Sullivan however persisted that Van der Merwe’s e-mails do not qualify as such, that she failed to specify that they were protected disclosures. He further stated that RBP’s proprietary information contained in the e-mails was later used unlawfully against Bobroff.

He said she acted in contravention of clauses in her employment contract. Mlotshwa put it to O’Sullivan that he references the events in the context of employment or criminal conduct, whichever suits him at the time.

O’Sullivan denied that he threatened Van der Merwe to get a confession from her. He said she had already admitted to all the allegations against her and he merely pointed out two options to her. She could either make a written sworn statement containing the admissions and become a state witness in the prosecution of Beamish for possession of stolen goods or “stand in the dock with him”.

He confirmed that he did not eventually lay charges against her when she failed to make the statement. He said he withdrew when she insisted on having her legal representative Advocate Schalk van der Sandt draft her statement. She later reached a settlement with Bobroff in terms of which he would not lay criminal charges against her.

O’Sullivan said he in fact told Van der Merwe if she were to be prosecuted she would in his view not go to jail, being a single mother.

Mlotshwa put it to him that he still fails to realise that his actions constituted a threat against Van der Merwe. He responded: “If that is a threat, every forensic investigator in this country is making threats every day!”

Mlotshwa is expected to complete his cross-examination of O’Sullivan on Thursday morning.