The registrar of the Road Traffic Infringement Agency (RTIA) got a 93% salary increase as his earnings of R1.8 million grew to R3.49 million in 2016/17, the agency’s annual report shows.

The RTIA is an agency of the Department of Transport, mandated to administer the Administrative Adjudication of Road Traffic Offences (Aarto) Act, which has been partially implemented in Johannesburg and Tshwane only. Following a recent amendment to the Act government hopes to implement Aarto countrywide in the foreseeable future, including the points demerit system.

Over the same period the board and board committees members’ total remuneration grew from R1.66 million to R3 million.

This comes as the agency’s revenue shrunk by almost 42% or R100 million and the minister approved the removal of four crucial performance targets.

Registrar Japh Chuwe in his overview ascribes the drop in revenue to the fact that issuing authorities have issued 63.44% fewer traffic fines. The actual number of Aarto notices (fines) issued dropped from 5.5 million to 2 million.

Chuwe further states that court challenges the agency was embroiled in resulted in reduced levels of public compliance and a dispute with the South African Post Office about the payment of postage impacted revenue.

He points out that the agency nevertheless showed a surplus at the end of the period and obtained a clean audit report.

The Minister of Transport approved the removal of performance targets that required the RTIA to serve 1.3 million courtesy letters within 40 days and 1.2 million enforcement orders, also within 40 days.

The RTIA reports that it verified 382 issuing authorities (mostly municipalities) for Aarto readiness and got a 100% score for the strategic target: “Coordinate and facilitate readiness for national implementation of Aarto”.

Where Aarto was in force in Johannesburg and Tshwane its operation was however far from perfect in the reporting period.

The Johannesburg Metro Police (JMPD) reduced its camera speed enforcement drastically from June last year, as Moneyweb earlier reported. This has a huge impact on the total number of fines issued. 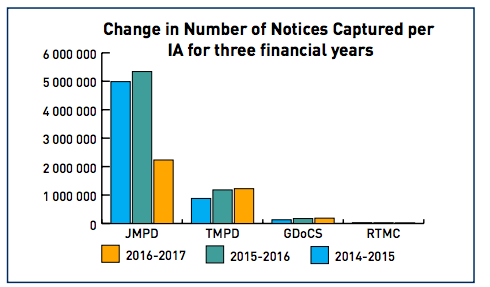 Even before these problems reared their head, the RTIA’s dispute with the Post Office caused a standstill in the issuing of courtesy letters to alleged transgressors who failed to pay or respond otherwise to fines issued by the issuing authorities.

From April to September last year the RTIA issued a mere 21 courtesy letters to the Post Office for service on motorists. Over the full period the number of courtesy letters issued reduced by more than 80%.

The legislated Aarto enforcement process cannot progress to full enforcement unless every step is followed, starting with the issuing of the infringement notice, followed by a courtesy letter and then an enforcement order. Motorists have different options available to them along the way, including making representations or electing to go to court.

The agency states that the dispute with the Post Office was resolved shortly before the year-end and the serving of notices is back to normal.

The agency reports that 79 122 Aarto cases were heard in court during 2016/17. This resulted in only 314 guilty verdicts. 122 warrants of arrest were issued. More than 7 000 cases were removed from the court role and almost 64 000 cases were still pending at year-end.

The legislative changes provide for a tribunal that would replace court hearings in an effort to unclog the system. Commentators have however criticised it as being unconstitutional and a court challenge on this basis might follow before Aarto is being implemented countrywide.