Your retirement capital fully invested in the ANC’s chaos

A serious relook at Regulation 28 is needed. 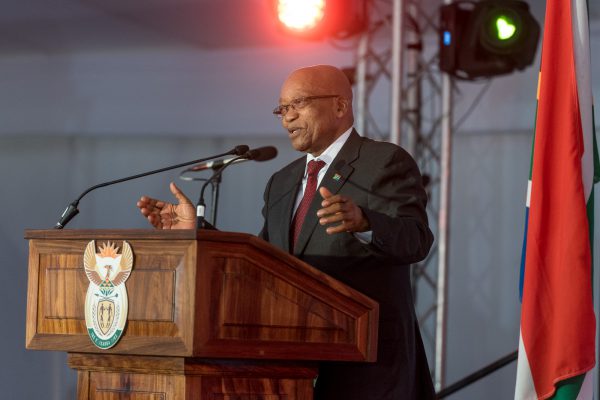 President Jacob Zuma makes a speech during the celebratory lunch in honour ofthe unveiling of a statue of OR Tambo in the International Arrivals terminal of OR Tambo Airport in Johannesburg on 19 October 2017. Today marked the unveiling of a statue in honour of the struggle icon by President Jacob Zuma. Picture: Yeshiel Panchia

Planning for retirement is full of obstacles. That we already know.

Hardly a day goes by when one article or another doesn’t warn about the dangers of underinvesting, not investing, bad advice and the impact of fees etc. Even National Treasury has waded into this debate and several years ago published the by-now well-known report compiled by actuary Rob Rusconi.

But the biggest obstacle, currently, that prevents most South Africans from creating enough capital from which to retire is at heart a quasi-political one: Regulation 28 of the Pensions Act. More worryingly, there seems to be a deathly silence on this issue. Like not wanting to discuss the elephant in the room.

There might be behind-the-scenes discussions with Treasury on this issue, but I cannot find or recall one industry spokesman prepared to rock the boat and appeal for an adjustment of Regulation 28 which will allow pension funds and their members — i.e. you and me — to have greater freedom to invest our retirement capital where we choose to do.

Currently Regulation 28 prescribes the maximum exposure the fund (of the individual) may have to various asset classes.

In an explanatory note when the revised guidelines were issued in 2011 the Financial Services Board (FSB) had the following to say: “Regulation 28 to the Pension Funds Act imposed limits on the investments of retirement funds. These were intended to protect funds against making imprudent investments…”.

Regulation 28 prescribes maxima for the various types of investments that may be made by a retirement fund. The maxima are broadly:

*No more than 75% may be invested in equities;

*No more than 25% may be invested in property;

*No more than 90% may be invested in a combination of equity and property;

*No more than 5% may be invested in the sponsoring employer;

*No more than 25% can be invested offshore but this can be increased to 30% if the additional 5% is invested into Africa.

We know what’s good for you

Prior to the amendments in 2011 retirement funds were only allowed to invest 15% into the listed property sector, despite this sector being the best asset class over the previous ten to 15 years.

The local listed property sector has, for many years, been the outstanding asset class, outperforming all other sectors including offshore until fairly recently. Yet, investors were not able to have more than 15% exposure to this asset class until recently.

Is this how the regulators protect individual members? By limiting their exposure to the best asset classes and forcing them into underperforming assets, such as bonds and recently South African equities.

We are now having a repeat with the local equity market massively underperforming its global counterpart for more than six years now and yet retirement fund trustees and investors are continuously told that this restriction is good for them.

It prevents them from making stupid mistakes. Officialdom knows best. And so on and on.

I would love someone from the investment industry or Treasury to give me and the readers of Moneyweb an explanation how this decision was made — considering the massive outperformance of listed property initially and now offshore assets.

The investment industry acts as a non-paid administrative arm of Sars for which, in my view, it gets very handsome tax and other incentives.

By blowing the whistle on the impact of Regulation 28 on investment returns of retirement fund members, you are guaranteed a very short career in the financial services industry. If you want to make a stand on something, don’t do it with Regulation 28.

Over the last six years and more the JSE has been the worst-performing market when compared to all other major regions in the world, whether measured in US dollars or in rands. And not by a short head but by a long shot. But Regulation 28 of the Pensions Act, no doubt under direct influence from exchange control regulations, says you may only invest 25% into offshore markets. The rest must be invested locally.

Why can’t individual members of pension funds who are sophisticated and experienced investors not be given freedom to invest their money where they wish? Such as progressive countries like Australia?

No protection against the ANC’s disastrous economic policies

In essence, retirement fund members have very limited protection against the economic collapse we are experiencing under the chaotic and disastrous rule of the ANC lead by President Jacob Zuma. What is more worrying, is that very few investors truly understand this and what it is doing to their future retirement capital.I have been writing about this for several years now. One of the first things I do on a Monday morning is to do a comparative analysis of the performance figures of the JSE versus all the other major sectors in the investable universe, in rands or in US dollars.

And for a very long time now the results have been the same: SA is lagging the investment race and lagging badly. See from the table just how poorly we are doing. These returns are in rands. Measured in US dollars the result is the same. Investment returns in dollars have been negligible over the last five years.

Stone last over every period measured 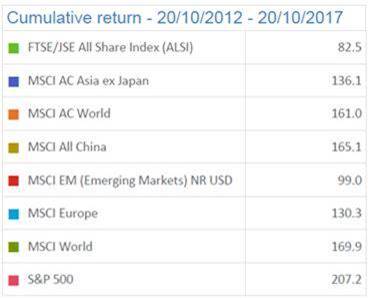 How much of a drag has this been on the investment returns of SA pension funds and retirement funds?  It would take an actuary to do the actual calculation but I would suggest that it has been at least 3% to 5% per year (if current trends continue) over the last five years and more.

Current members of retirement funds cannot do much, apart from hoping that their trustees and advisors are using the full offshore capacity in order to generate some much-needed additional growth as — we all know — the local market has been struggling of late. Strip out Naspers, Richemont, Glencore and BATS and the rest of your portfolio (your future pension) has gone backwards. And as I’ve pointed out in many other columns — your second leg of future retirement funding — residential property — is also declining in real value.

The future for retirees will become increasingly bleak if these two trends don’t change anytime soon.

My advice, for a very long time, has been for investors (older than 55) to remove their retirement funds from the stranglehold of Regulation 28 as soon as it is legally possible.

Investors over the age of 55 with money in a wide range of retirement investments, such as retirement annuities, pension and provident preservation funds have the option of moving their retirement capital away from the clutches of Regulation 28. This can be done but making permissible withdrawals, tax free and/or taxed, and moving the balance into a living annuity.

Certain funds also allow a full withdrawal (provident preservation) but such a move is subject to taxation. It would need careful consideration as the impact of taxation is onerous.

By moving money out of the fund in question, either into cash or into a living annuity, you move away from the restrictions imposed on your money by Regulation 28. Money in your hands can be moved directly offshore whilst a living annuity can have 100% offshore exposure, in the best asset classes and best investment themes in the world.

I have done this with my own money and have seen the difference in returns.

So, pardon me when I react with a heavy dose of cynicism whenever I hear someone from the investment industry or even worse — government —exhorting people to save more for their retirement. Invest more into the weakest-performing investment market in the world right now? No thank you.