Concern that further tax hikes could be self-defeating.

According to the Medium-Term Budget Policy Statement (MTBPS), tax revenue is expected to fall almost R51 billion short of earlier estimates in the current fiscal year. The budget deficit is projected to widen from 3.1% to 4.3% of GDP.

“The inquiry will help to assess what factors are responsible for the under-collection of revenue by Sars, and what steps need to be taken to improve performance management systems at Sars to improve its capacity to collect revenue,” National Treasury said on Tuesday.

A commission would be established soon.

Treasury said the MTBPS recognised that while the faltering economy was the most likely factor driving lower revenue collection, other dynamics could also be at play, including a deterioration in tax morality and tax administration stumbling  blocks.

Analysts have warned that the deterioration in South Africa’s fiscal numbers has increased the risk of further credit ratings downgrades.

The probe also comes amid warnings that further tax hikes could be futile and may even result in a decline in the country’s tax-to-GDP ratio.

Kyle Mandy, tax policy leader at PwC South Africa, says the MTBPS suggests South Africa has maximised the tax revenues it can extract from its citizens in the current environment and may have even gone past a point where higher tax rates lead to higher revenue.

The Laffer curve is an economic theory that depicts the relationship between tax rates and tax revenue. It suggests that once taxes are raised beyond a certain level, revenue starts falling (see below). 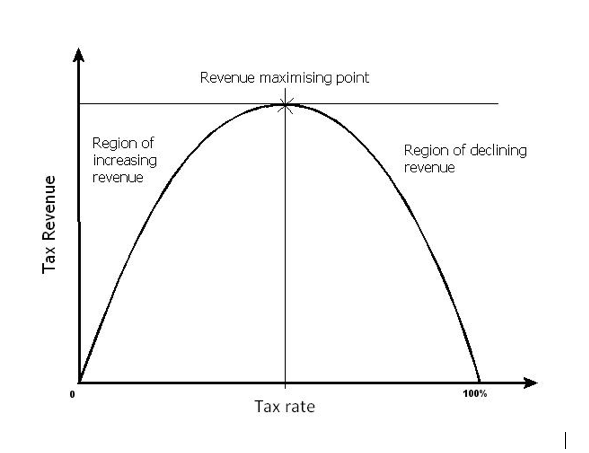 Mandy says while the theory mainly shows that taxing an economic activity results in lower production of that activity and resultantly lower tax revenues, it also demonstrates that higher tax rates provide a greater incentive for tax avoidance and evasion.

“It is important to recognise that a tax system does not operate in a vacuum. It is impacted by the social, economic, and political environment in which it operates. The result is that where taxpayers perceive a government to be corrupt, inefficient and wasteful, not delivering benefits to taxpayers or the broader citizenry of a country in tough economic times, will result in the Laffer curve shifting downwards and to the left. The result is that the tax system will be able to deliver less tax revenues at a lower maximum rate than would be the case in the absence of such conditions,” he says.

To plug the holes in its fiscal boat as the economy slowed, National Treasury has introduced various tax hikes over the past few years. The main budget tax-to-GDP ratio increased from 24.5% in 2012/13 to 26% in 2015/16, mainly as a result of higher effective personal income tax rates.

But the tax-to-GDP ratio has subsequently stalled at 26% in 2016/17 and in the latest 2017/18 forecast and it is not inconceivable that the final outcome for the current fiscal year could fall below 26%, Mandy says.

“The stalling of the tax-to-GDP ratio comes despite significant tax increases in each of 2016/17 and 2017/18 which were expected to deliver R18 billion and R28 billion of additional tax revenues respectively.”

“In other words, the tax increases in the last two years have simply resulted in the tax revenues tracking GDP and have not resulted in an increase in tax revenues relative to the size of the economy,” Mandy says.

He says the nominal GDP forecast for the current fiscal year was revised downwards by R69 billion. At 26% of GDP, this results in a tax shortfall of roughly R18 billion.

“This suggests that the balance of the projected revenue shortfall of some R33 billion relates to increased tax avoidance, a slippage in the levels of compliance or other tax administration-related causes (this is in line with the fall in the original forecast tax-to-GDP ratio for 2017/18 from 26.7% to 26%).

“Of course some of this decline may be attributable to overly optimistic tax buoyancy ratios applied by National Treasury in its original forecasts, but clearly a large portion relates to the factors mentioned,” he says.

“Regardless of the reasons, the evidence suggests that tax increases are no longer providing the desired result in the form of increased tax revenues.”

Gigaba seems to be aware of the dangers of additional tax hikes and warned in his MTBPS that it could be “counterproductive”.

But amid concerns that debt accumulation is not sustainable, where does that leave National Treasury’s efforts to get the fiscal numbers back on track?

“The way to increase tax revenues is to try and grow the economy and broaden the tax base,” says Andrew Wellsted, head of tax at Norton Rose Fulbright.

The current tax framework largely taxes the same group of people and it becomes counterproductive, he says.

Patricia Williams, partner at Bowmans, also believes the relatively small tax base is a serious problem. Although the Tax Administration Act allows Sars to inspect a premises where it reasonably believes a trade is conducted to determine if the business is registered for tax, these inspections haven’t been a priority.

There is also a need to urgently address the perceived illegitimacy of Sars and the reduction in skills levels at the revenue authority. Sars also requires highly-skilled individuals to conduct audits with regard to transfer pricing, international tax and tax avoidance structures.

Mandy says while VAT is probably the only tax that could realistically be increased and still deliver increased tax revenues in the current environment, the other option is to cut expenditure, although this aspect of the budget is also inherently political.