Food shortage in KZN averted, but access is the problem

The bottom line is that we can clean up, but we must rebuild something different. We cannot go the way it was. – Julie Smith, researcher at the Pietermaritzburg Economic Justice and Dignity group. 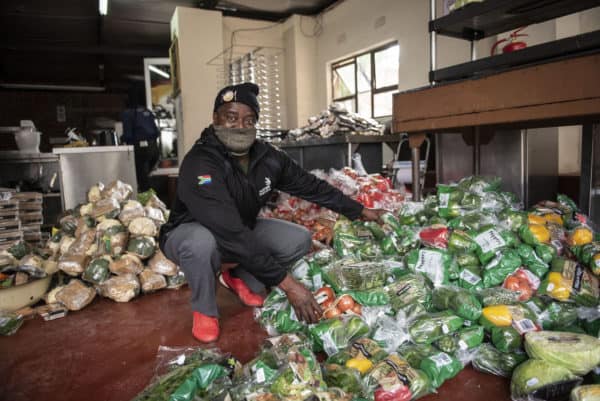 Thembinkosi Khumalo from the CK Foundation and Nosh Food Rescue poses for a photograph among some of the food donated to the charity, 16 July 2021, in Tembisa. Much of this fresh produce was destined for stores that were looted and now had to be donated to the charity for redistribution. Picture: Michel Bega

A food shortage in KwaZulu-Natal seems to have been averted, but access to shops that are still open is the problem now. Poor people have to spend more money on transport, as they are unable to shop around for lower prices.

“Poor people were going hungry before the pandemic even started. The pandemic made it worse and now poor people are starving even more,” says Julie Smith, researcher at the Pietermaritzburg Economic Justice and Dignity group.

She points out that the hunger problem in the country is nothing new. Research has shown that South Africa is the most unequal country on earth and the group has been calling for help for the poor for many years.

“We told government five years ago that something is coming, but nobody listened,” Smith says.

The conditions that started the looting are still there, but much worse.

“Many people have also lost the jobs they had, especially tellers at shops. They were paid a pittance, but they had a job and that is also gone now and they do not have the skills to do something else.”

Smith says the looting and unrest definitely had different strands of desperation and opportunity, as well as criminality.

While there are worries about a food shortage or crisis in the province, Smith says it is hard to tell if there is really a shortage.

“Food is coming into the cities, but the problem is that it cannot be sold in shops that were looted and burned. Now we have endless queues of people waiting to buy staples. The problem is about access.”

Many outlying shops and tuck shops near areas where poor people live have been destroyed. This means that people with little money cannot hunt for bargains and have to also fork out more money for transport, where they could walk to the shops in the past.

“There has also been some profiteering, such as the price of bread going up from R9.50 to R20, but that is changing as more trucks come in.”

Helping out with food

Smith says NGOs are trying to help, but this cannot solve the problems.

“As the situation continues, more people get hungrier and then more looting can start. On the short term we need charity to solve immediate hunger, but we need to become more resilient. We have now seen how fast groups of people can destroy the supply chain. We must learn from this.”

Smith says one of the saving graces has been people in poor areas setting up tables next to the road and selling what food they can get.

The problem with hunger will not go away soon and Smith says it is important on the long term to get to a point where we admit there are no new jobs coming quickly enough.

“A total of 47% of black people are unemployed. They are always promised that jobs will come, but the jobs never come.”

She says it is time to look at alternatives to help people create a livelihood and a better life.

“An economic stimulus is needed to firstly ensure that people can feed themselves and then branch out into a small business.”