Two years for Charlotte Maxeke Hospital to reopen fully, but why?

Why does the department expect to take two years to fully repair the hospital, when it would take 3 years to build a brand new facility? 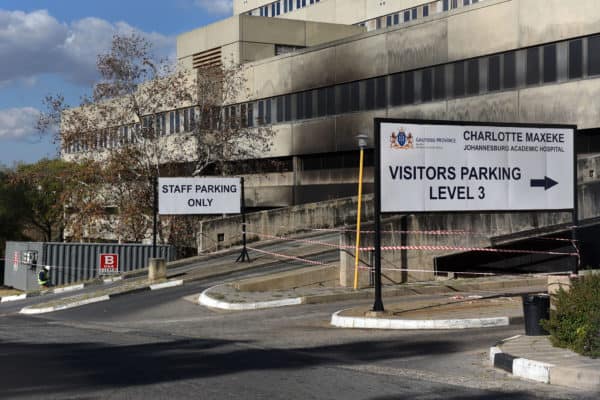 How long could it possibly take to fix the Charlotte Maxeke Academic Hospital while we are in the middle of a pandemic? Does anybody have a plan, or will this contract follow the way of all other government contracts that end up costing twice as much and taking twice as long?

These are some of the questions the public has been battling with for the past few months, since sections of the Johannesburg hospital went up in flames.

According to Gauteng health MEC, Nomathemba Mokgethi, about 2,000 outpatients a day cannot be treated at the hospital after it was damaged by a fire on 16 April this year, while other hospitals have to cope with extra patients referred to them. Only 489 beds in the 1,000-bed hospital are in use.

Mokgethi was answering a question from DA shadow MEC for health, Jack Bloom, in the Gauteng Legislature. She could not give a firm date for the opening of all departments, as this depends on work done by the department of infrastructure development.

The emergency department, as well as the psychiatry department will not be open by the end of this year, as they are in the section most damaged by the fire, while it is estimated that it will take two years for the structural work on the hospital to be completed.

ALSO READ: Parts of Charlotte Maxeke Hospital to be fully operational in 2023

No date has been set for the part that was damaged in the fire to open after that. The question is if it can really take that long to fix a hospital? Are there any technical reasons for it taking so long?

“It is unclear why it would take two years because building an entirely new hospital will only take around three years,” says prof. Alex van den Heever, chair of social security systems administration and management studies at the Wits School of Governance.

He says he finds it strange that everybody is totally silent about redeploying under-utilised staff from Charlotte Maxeke to other hospitals, because this would make sense while the building work is underway.

“This is essentially how you can address the problem at Helen Joseph hospital,” he says.

Digital Vibes money could have gone a long way in helping

Maybe the R150 million paid to Digital Vibes could have made a difference to fixing Charlotte Maxeke.

Van den Heever says the Digital Vibes expenditure was clearly a complete waste and could have been better spent in the health system. He hopes the Special Investigation Unit (SIU) will succeed in its application to get the money back.

Bloom says according to Mokgethi, the partially reopened hospital now sees on average only 381 outpatients per day, compared to 2,344 per day before the fire, a reduction of 84%. Departments that are still closed include some of the surgical and medical specialities, psychiatry, accident and emergency and the trauma unit, as well as maternity and paediatric emergencies.

“The majority of outpatient services have been transferred to other hospitals with the staff and equipment from Charlotte Maxeke. This causes major disruptions in treatment and much inconvenience, as sick patients have to travel further distances.”

He says Helen Joseph hospital has been the most negatively affected, with large numbers of emergency patients stuck for days at casualty before being admitted to a ward. This icludes 26-year-old Sichelesile Dube who died in a wheelchair after staff ignored her for more than a day.

“I am distressed at the continuing delays in fully reopening this hospital, which badly hits thousands of patients, including those who need surgery to save their lives or alleviate pain. The Gauteng health department should be innovative and use private sector expertise to speed up the repair of the hospital as soon as possible to get all its departments running,” Bloom says.

He points out that if a fire happened at a private hospital the damage would have been fixed by now. He describes the Gauteng department of infrastructure as incompetent and says he will not be surprised if the first contractor spends all the money before all the work is done, followed by another tender to choose a contractor that will cost more and take longer.

“The psychiatric ward at Charlotte Maxeke took 10 years and four contractors to complete. And that was only one ward.”