Between 9-17 July, at least 1,227 ATMs and 310 bank branches were vandalised or destroyed in the unrest. 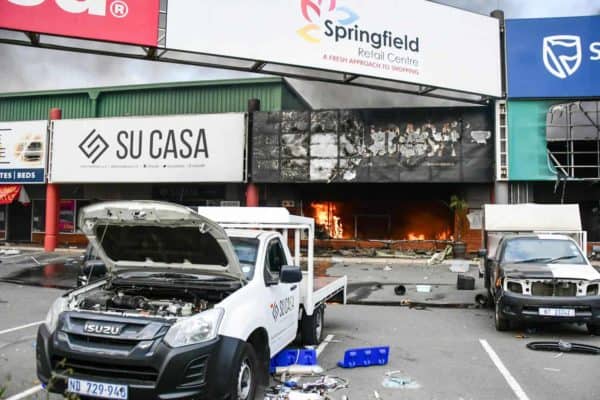 The amount of hard cash lost during last month’s chaotic looting and unrest in parts of Gauteng and KwaZulu-Natal has recently been quantified.

According to a press statement issued by the South African Banking Risk Information Centre (Sabric), ATMs and bank branches lost R119,400,243 in cash.

Between 9-17 July, at least 1,227 ATMs and 310 bank branches were vandalised or destroyed in the unrest.

“There is great concern over the impact of intelligence failures and the state’s response to the eight consecutive days of civil unrest that resulted in unprecedented destruction of banking infrastructure in South Africa,” Sabric CEO Nischal Mewalall said.

Of the 1,227 ATMS that were hit, 256 were broken into, and 36 ATMs were physically stolen and have not been recovered.

82 in-branch safes were also breached in the violence.

“The theft of R119,400,243 in hard cash is very concerning. Not all notes are dye-stained and millions in unsoiled notes will be injected back into the economy.

“This money is the proceeds of crime and there is now a war chest available to fund more organised crime, to corrupt more officials and to promote lawlessness,” Mewalall said.

Sabric said the country’s anti-money laundering and counter-financing of terrorism was the only way in which those behind the crimes could be detected.

The centre has urged businesses to be stringent about cash threshold reporting, and not to engage in any suspicious transactions.

If unusual transactions are picked up, business owners are urged to contact the Financial Intelligence Centre immediately.