The president gave confident feedback to parliament on Friday, but he did not go ‘back to basics’ as far as economists would have liked. 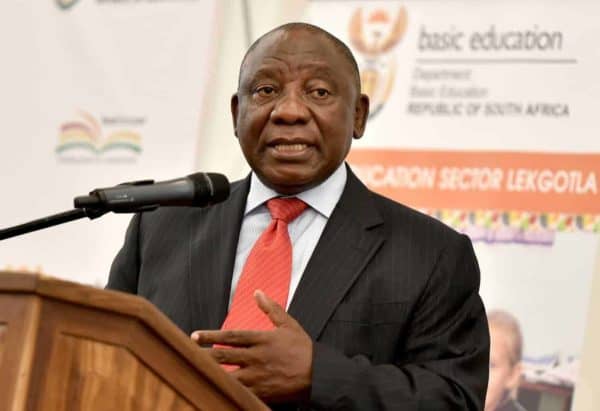 President Cyril Ramaphosa said South Africa wants the UN to "put the issue of reparations for victims of the slave trade on its agenda". Picture: Flicker/GCIS

President Cyril Ramaphosa said in parliament on Friday that employment stays ‘top of mind’ and promised that ‘a number of proposals are coming’. Several programmes will also be implemented in the next few weeks.

He was responding to a question by MP Itiseng Kenneth Morolong from the ANC about how government is mobilising funds for economic recovery and the elements of the economic reconstruction plan that will transform the structure of the economy.

ALSO READ: Jobs, Eskom, BEE: Ramaphosa’s Friday speech must get ‘back to the basics’

Ramaphosa said alongside the reform agenda, government is implementing measures to support employment. “Employment stays top of mind for government. The Presidential Employment Stimulus has supported close to 700 000 job opportunities to date, largely to young people. This is an unprecedented achievement in our country in such a short space of time.”

He said a further R11 billion has been allocated to continue the job stimulus, while several programmes will be implemented in the coming weeks, which includes the continuation of the Basic Education Employment Initiative and expanded support for small-scale farmers and workers in the early childhood development sector.

“The violent unrest that occurred in KwaZulu-Natal and Gauteng in July dealt a further blow to our economic recovery. We know that, according to estimates, the impact on our GDP will amount to nearly R50 billion.”

The president then referred to the measures announced to provide relief to affected businesses and poor households, the reinstatement of the Social Relief of Distress Grant until March 2022, support to businesses affected by the unrest, government’s commitment to back Sasria, the extension of the Employment Tax Incentive and deferred tax payments.

“The interventions that we have implemented have sustained millions of jobs, prevented the closure of a number of businesses and provided relief to the most vulnerable in our society. Thus far, close to 12 million people have applied for the social relief of distress grant.”

“The Economic Reconstruction and Recovery Plan is our blueprint for building a more inclusive, more equal, more resilient, and faster-growing economy. Since I last addressed this house, we have made significant progress in turning that blueprint into a reality,” the president said.

He explained that government remains focused on:

He also referred to the publication of the regulations to raise the licensing threshold for embedded generation projects to 100 MW and called it a ‘defining moment in energy generation’ in South Africa.

“This will not only alleviate the immediate energy supply shortfall, but will lead to massive investment in new projects and stimulate growth. It has been widely welcomed, not only in our country, but also globally.”

The president was excited about the certainty this will provide for investors that the current electricity challenges will be resolved. Investors will be able to confidently invest in new factories, mines and other initiatives, such as data centres.

He also mentioned the establishment of the National Ports Authority as an independent subsidiary of Transnet designed to make port operations more efficient and enable greater private investment in port infrastructure.

Referring to discussions between the Independent Communications Authority (ICASA) and various role players and licensees to reach a settlement to allocate high-demand broadband spectrum, and call on those who are part of this process, he called on all parties to work together to reach agreement.

“Significant work is underway in a number of other reform areas that include the water sector and the visa regime over the coming months.”

However, he said, “we have a long way to go in our economic recovery. The statistics released for the second quarter of this year are a reminder of our unemployment crisis and the extent of poverty in our country. While the interventions contained in our reconstruction and recovery plan are necessary and significant, I will say now that they are not enough.”

Ramaphosa reiterated that it is time to assess how far we have come, reflect on the choices that confront us as a nation and take bold actions to achieve economic progress, saying this is the singular focus of his mission and the mission of government.