Numsa workers will return to work by Monday

The Numsa strike started on 5 October, after unions and employer associations in the steel and engineering sector reached a deadlock. 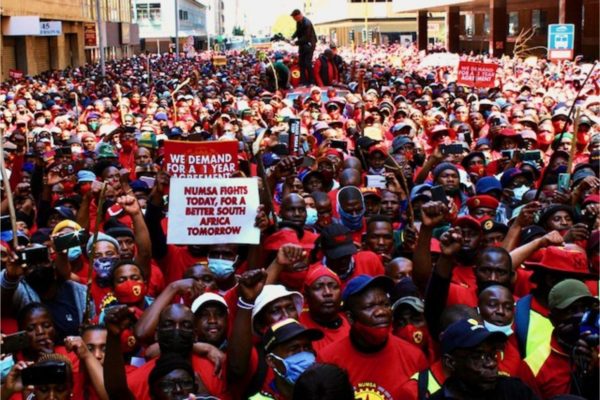 Thousands of Numsa members working in the engineering sector marched to the Metal and Engineering Industries Bargaining Council in Johannesburg on 5 October to mark the beginning of the ongoing strike. On Thursday, Numsa reached an agreement with the employers, ending the strike. Archive photo: Masego Mafata

Steel and engineering workers who have been participating in the nearly three-week strike for higher wages led by the National Union of Metalworkers of South Africa (Numsa) are to report for duty by Monday.

The union accepted a three-year offer by employer association, Steel and Engineering Industries Federation of Southern Africa (SEIFSA), on Thursday.

The agreement states that the highest paid (artisan) workers will receive about a 5% increase of R4.24 per hour for the first year and R4.45 for the second year, and R4.67 the third year.

“The offer will be implemented immediately and workers will receive their back pay from 1 July 2021. This includes implementing the rest of the package of the agreement reached between NUMSA and SEIFSA,” said Irvin Jim, Numsa general secretary during a media briefing in Johannesburg.

He said workers will return to work no later than Monday.

The strike started on 5 October, after unions and employer associations in the steel and engineering sector reached a deadlock. Workers were demanding an 8% wage increase.

Last week, Numsa had initially rejected SEIFSA’s offer of a 6% increase, demanding that the increase be calculated on what businesses actually pay workers and not the minimum rates as set by the Metal and Engineering Industries Bargaining Council (MEIBC) Main Agreement.

Jim said the strike was a victory for workers because it was only after the Numsa strike began on 5 October that SEIFSA increased its wage offer from 4.4% to 6%.

Once the agreement is endorsed by MEIBC’s management committee, Jim said the union will request Labour Minister Thulas Nxesi to gazette the agreement and extend it to non-parties in line with the Labour Relations Act and the MEIBC Constitution.

Workers affiliated to Metal and Electrical Workers Union of South Africa (Mewusa) have also accepted SEIFSA’s offer and the union signed the agreement on Thursday afternoon.

“The strike was taking a toll on workers because for every day that they did not work, they did not get paid,” said Peter Madigoe, Mewusa deputy general secretary.

“We are immensely pleased that the strike is finally over. It is now incumbent on all stakeholders in the metals and engineering sector to work collectively to rebuild and grow the sector,” said Lucio Trentini, SEIFSA CEO.