The Jacksons to unite and perform in SA

Michael Jackson's group will be performing together in SA for the first time, along with a host of great local acts. 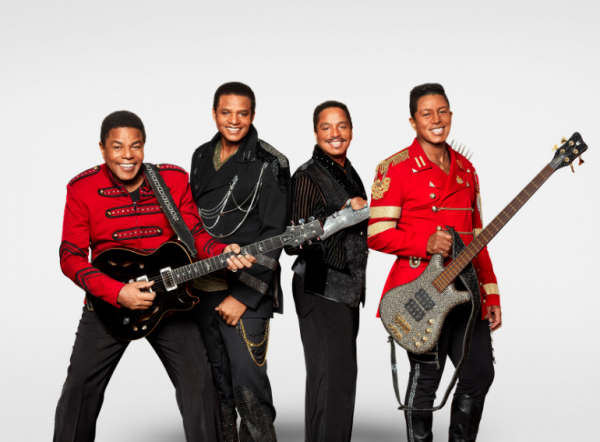 The DStv Delicious International Food and Music Festival is back for the fourth year over two days, from October 8 to 9, with the main headline act for Sunday, October 9, being none other than The Jacksons.

Following a short reunion of the band in 2010 for the Unity Tour the group played its last show together on December 9, 2010 in Osaka, Japan.

The previous reunion of the band, nearly 17 years after the group originally disbanded, was in September 2001 – at which time all six Jackson brothers reunited for two performances at Madison Square Garden for a 30th anniversary special commemorating Michael’s solo career.

The “King of Pop” last played in South Africa during the History Tour at King’s Park Stadium, Durban, 19 years ago, on October 15, 1997, but this will mark the first-ever performance of the original Jackson brothers as a group in South Africa.

“October 9th 2016 will be historic: in our 50th anniversary year, it is the first time The Jacksons will unite to perform in South Africa. We couldn’t be more excited to close out the amazing DStv Delicious International Food and Music Festival. South Africans are a great musical people and we can’t wait to see Johannesburg come out and rock with us!” said Jackie Jackson.

On Saturday, fans can enjoy Grammy Award-winning producer/artist/DJ, “Little” Louie Vega of Elements of Life fame. Elements of Life is a combination of jazz, Latin, R&B, gospel, soul, blues, Brazilian and world music all woven with Vega’s golden touch as part of his critically acclaimed live orchestral project, which was released in 2013.

Big billing on Saturday’s main stage line-up also goes to arrested development, Rolling Stone magazine’s band of the year in 1992, who went on to collect two Grammy Awards in 1993 for Best New Artist & Best Rap Single. They were the first and last rap group to to win the Grammy’s coveted Best New Artist award.

South Africa’s triple platinum-selling trio Mi Casa will be one of the headlining acts on the main stage. The award-winning group shot to fame in 2011 with These Streets, and has continued to reach new heights with every single and album released since.

De La Soul rounds out Saturday’s performance. The original hip hop trio from New York City, who, besides their musical style, delivered us the iconic rapper style of baggy pants and hiker boots, also went platinum in the US and UK on their debut album 3 Feet High and Rising in 1989.

Sunday sees Louie Vega and Elements of Life on the main stage again.

They are joined by SA music star Lira – the multi-platinum selling and 11-time Sama-winning Afro-soul vocalist who refers to her music as “a fusion of soul, funk, elements of jazz and African soul” – and Roy Ayers. Ayers, known as the “The Godfather of Neo Soul”, is a pioneer of jazz-funk and a key figure in acid jazz, which is a mixture of jazz into hip hop and funk. He is most well known for his signature compositions Everybody Loves the Sunshine and Searching and is famous for having more sampled hits by rappers than any other artist.

For local flavour, our home-grown jazz and Afro-pop vocalist Judith Sephuma will help to get you in the mood for the big act of the weekend.

Sephuma is known as South Africa’s “best jazz vocalist” having won this title at the Old Mutual Jazz into the Future competition.

“The DStv Delicious International Food and Music Festival presented by Nedbank is part of our ongoing commitment to bringing world-class experiences to our customers. To this end, we are pleased to announce that we will be offering current DStv customers a 20% discount on tickets to the festival. Customers can use their unique customer number to redeem their discount on Delicious Lounge and General Access tickets until midnight on 03 July and enjoy the amazing DStv Delicious Festival 2016 with us,” says Nomsa Chabeli Mazibuko, general manager of marketing for MultiChoice.

DStv Delicious takes place this year for the first time at the 73ha 55-year old Kyalami Grand Prix Circuit that has recently undergone a massive multimillion-rand upgrade. The main stage will offer live performances presenting iconic music artists, while the Kaya FM dance stage will present a line-up of some of the hottest local and international DJs available.

Couple all this to the Nedbank Green Wine Garden, a decadent food market offering the finest foods and delicacies, great gourmet chef food restaurants, including Reuben Riffel, J’Something, Sarah Graham, Somizi, Callie-Anne and the Let’s Call it Brunch banquet, and a bigger and better than ever DStv kid zone.

Gates will open at 10am each day; patrons can bring their own camping chairs and umbrellas. No picnic baskets, drinks or alcohol are allowed through the gates.