It all started with a blog and Lawrence Manyapelo's curiosity about sexuality. Lawrence Manyapelo takes celebrities out of their comfort zones for his shoots. Picture: Supplied.

As a photography and multimedia student, Manyapelo was fascinated by the power of images and their ability to send strong messages about social issues. His blog, which he named Previdar, became his platform to explore some of his questions around homosexuality, using his skills in photography and design to express his thoughts.

“When I first started out, I would take pictures of people around my neighbourhood and sell them for R5,” he says.

“But after some time, I felt like I needed to create photography that would not only challenge me in my creativity, but also make other people think and question things around them. So I took portraits of gay men and spoke to them about their experiences of being gay at a time when homosexuality was not talked about at all in black communities.”

It wasn’t long until Manyapelo’s work caught the eye of radio and television presenter Pabi Moloi, who asked him to photograph her for his blog.

“Working with Pabi was such a huge honour, but it was challenging at the same time,” says Manyapelo.

“I had to do a photo shoot with no budget and very little studio equipment, so I decided to do the shoot in my kitcken. It was tricky but it worked out in the end.” Soon after that, Previdar became a popular site among local celebrities, and Manyapelo turned his blog into an online magazine for which he photographs celebrities in unique and interesting ways.

“After seeing the amount of attention that Pabi’s photographs were getting, I thought it would be a good idea to combine my passion for creating artistic images with the ‘celebrity effect’,” he smiles.

With a lot of great ideas and no budget, Manyapelo decided to bring other unemployed artists on board. Through Previdar, he allowed aspiring fashion designers, photographers, writers, make-up artists, videographers and other artists/designers an opportunity to showcase their work and build a portfolio of their own for free within the magazine. With a full team behind him, Manyapelo took his work to new heights, photographing the likes of television presenters Sade Giliberti and Pearl Modiadie, actress Boity Thulo and more recently Top Billing presenter Bonang Matheba and television personality Pearl Thusi. 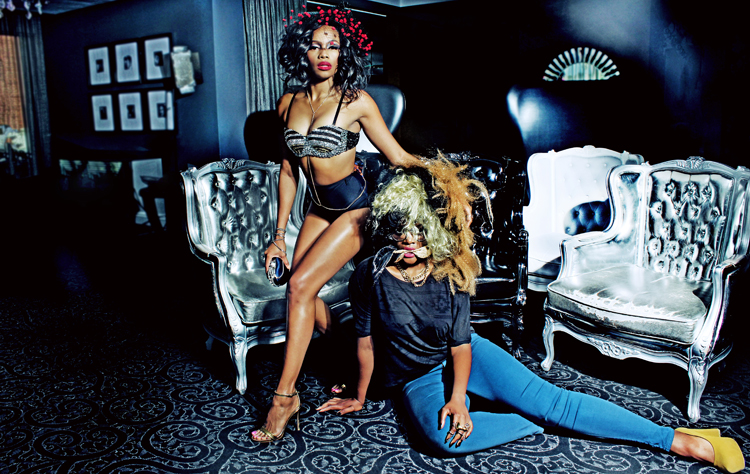 But it’s his photo shoots with entertainment blogger Mika Stefano and television presenter Bujy that have people talking. Stefano was photographed with his face painted black, resembling the theatrical blackface make-up used by white performers who played black characters in the 19th Century. However instead of creating something comical, Manyapelo attempted to photograph Stefano’s blackface in a more artistic and somewhat fashionable way.

“I was trying to get people talking about the issue of identity. The blackface is very controversial, so I was not surprised when people on social networks had a lot to say about it,” says Manyapelo.

While some interpreted the photographs as Manyapelo’s way of taking a symbol of blackness which is viewed negative and making it positive, others were quick to say that the images were offensive. Similarly, Manyapelo’s shoot with a half-naked Bujy posing provocatively next to a masculine model evoked mixed reactions among Manyapelo’s large social network following. His response to some of the negative comments is inscribed boldly on his website: “If it does not make you stop, keep quiet, shout, scream, touch it or does not evoke all sorts of startling reactions, then it is merely another pose, another photograph, another painting and just another model. If one’s mind ends up boggled, jaws dropped and if one takes extra time to observe its magnificence, then one is experiencing art.”