A glimpse into the crazy, crazy world of rock star Francois van Coke

The juggernaut rock star is the embodiment of local rockstarness, yet humble, wise and grateful. 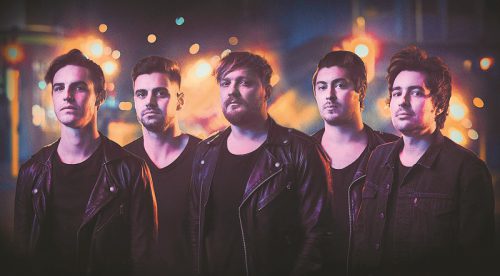 Francois van Coke is 100% talent and 110% dedication. The juggernaut rock star has become a defining presence in the South African music industry thanks to the well-oiled machine standing behind him.

From PR, digital marketing to sponsorship – the Van Coke empire is a vast one, yet in the end, Van Coke is all about the music.

Waiting two years between the release of his first and sophomore solo albums, Van Coke’s latest album, Hierdie is die Lewe gave the world some bouncy party starter anthems, that appeals to a wider audience without compromising his undeniable rockstarness.

If you want further prove of his reverence, on Tuesday Van Coke released his fourth music video for the album and song Die wêreld is mal.

Featuring imagery of human atrocities such as apartheid and World War II, the song plays into what is going on in the world now – from junk status to Donald Trump.

Van Coke on Tuesday mentioned junk status, Donald Trump and the ticking time bomb of politics – the world has gone crazy – but the song focuses on love and hope, despite the negatives.

1. With your new album, do you think you’ve sort of figured out what sells?

I think the launch period was great and it looks like it is going really well. I definitely do not have it figured out. I go through periods of serious stress before an album comes out because you never know how the public will react. But, I am super grateful that people take the time to listen to the tunes.

2.Did you print fewer albums for ‘Hierdie is die Lewe’ it seems you’ve been driving online sales more?

No, but music is definitely moving to digital. No doubt about it at this stage of the game, so I need to move with the times.

3.How much of a gamble is it to include vinyl when releasing an album?

It is not really a gamble at all. We press a limited amount and then they sell out pretty quickly.

4.Where do you think the music industry screws over artists in South Africa?

It is hard to make music for a living in South Africa. The market is very small, especially if you play rock music. It is very difficult for rock bands to survive because of the financial constraints. There are not many competent managers in the local industry. Also, recorded music does not have the same value after everything went digital.

5.What do you think the industry needs to do to change that?

I don’t think the industry should change, artists should adapt.

6.Your online store is pretty great. How involved are you in choosing merchandise?

I am very involved and have been since the start, I get different designers to work on artwork for the merchandise and try and make new stuff all the time. My wife helps me with that and I have a friend that steers the ship daily.

They are my band and they also played the instruments on Hierdie is die lewe. I have been playing with the same band since my first album came out and we have become great friends and they are all exceptional musicians. I wrote the lyrics for Hierdie is die lewe and we worked on the music together. I made a point to show them off in the Mensdom video.

8.Your music has become cross-generational with 18-year-olds, their parents and even their parents listening. How does that make you feel?

It freaked me out in the beginning, but I am very happy about it. When my first album and the single Toe vind ek jou came out, people started sending me videos of their kids singing the song. I have never experienced that before and the song has also crossed over to older people, like my parents’ friends. They were never interested in my music before. I still play at least half of my shows in clubs, so I also see loads of students at the shows. The people that are interested in my music have definitely broadened. I always intended to play my music to as many people as possible and like I said earlier, I am happy that people are keen to listen to the tunes.

9.You’re not swearing on the new album, was it a conscious decision, or was that just a natural progression in writing?

On my first solo album, there are two songs with loads of swearing on it and I realised those songs just get lost in the mix. I play them live though. I also wanted to see if I can make an album with no swearing on it, I have never done that before. I will swear again on the next Fokofpolisiekar album. Promise!

10.You seem to have a great aptitude for songs that translate well when they’re performed live. Do you think about live performances while writing?

I actually thought about it while working on the tunes for Hierdie is die lewe, but only because I thought that my set needed more upbeat tunes. I wanted to write a couple of bouncy, upbeat, punk-influenced tunes. Normally I don’t think about it, the band and I will always figure out how to do the songs properly in the live environment.

11.The album as a whole deals a lot with maturity – why did you decide to have that so explicitly part of ‘Hierdie is die Lewe’?

It is such a big part of my life at the moment. I needed to grow up sooner or later. I went through major changes the last couple of years, got married, moved to the suburbs, started a solo career, chilled on my crazy party habits and recently became a father. That is my life at the moment and I enjoy it and I want to take responsibility for my family. I just write about what is happening in my life, so there is no other way. It was going to come out.

12.Worst experience during the launch tour so far?

The worst experience was being away from my family. But, I do still love playing music. It is just much nicer going home these days.

13.Fokofpolisiekar started a Thundafund campaign last month – and it’s been going great. How much time have you set aside to work on the new project?

We will record in June, mix in July, pre-orders will go live in September and the album will be out in October. I meet up once a week with the Fokofpolisiekar guys to fool around with ideas for songs. My vocals will most probably be recorded towards the end of June. So at this stage, I have set June out to record with the Fokof boys. Hunter and Johnny will still be the main songwriters for Fokof, but I contribute where I can.

Van Coke in a nutshell:

Fill in the blank with Francois: