Hamlet, as the Bard intended 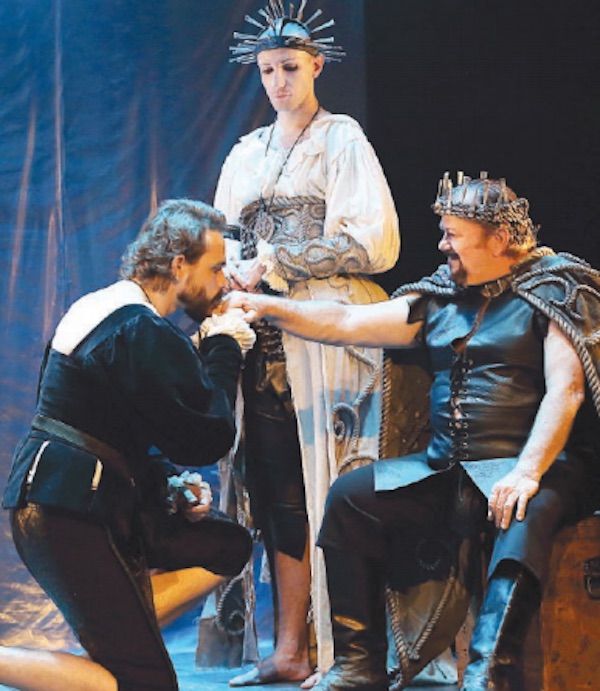 You see many bizarre things at Montecasino.

Right now if you visit you might get run over by a group of first-time drag queens on their way to Priscilla Queen of the Desert: The Musical.

You might also see posters for Hamlet on stage at Montecasino Theatre.

Quite an odd departure from the farces and jovial stage productions usually presented there.

While you might expect Hamlet to be a Pythonesque version, it’s not. It’s Hamlet the way it should be done – true to the words of Shakespeare and performed in a way that’s nuanced, painted with those daringly dark undertones that have made Hamlet one of the most revered plays in history.

This version, first performed at the National Arts Festival, is so well presented you might miss the fact that it’s actually set in 1608 on board the Red Dragon off the east coast of South Africa.

It starts with sailors preparing to perform their work.

As soon as they put on their Elizabethean garb, this play inside a play springs to life thanks to the original text. Throughout, belief is suspended thanks to a soundtrack of the Red Dragon’s creaks and the ocean’s ebb and flow.

It adds an eerie air that lingers throughout the three hours of showtime.

Many people find Shakespeare daunting, but the intimacy of the theatre ensures a space where you can allow the heady words to wash over you.

Hamlet at its core deals with revenge – Hamlet, the Prince of Denmark, finds out his father, the king, was murdered by his brother, Claudius.

When his father’s ghost reveals the crime, Hamlet feigns madness to cover his intenton to kill the new king. The plot includes a plan by the new king to kill Hamlet – as well as Hamlet killing Polonius.

The story is never convoluted and all the acts are neatly packaged in two sections for people new or unfamiliar with the work.

What all the actors (many quite young) seem to have aced is enunciation. It’s a wordy play of Elizabethan English but the cast manages to perform their respective lines with ease and clarity, while also taking on a variety of roles. Marcel Meyer as Hamlet is particularly eye-catching – he manages to defy death as he is nearly drowned on stage, and still musters his lines.

Callum Tilbury as Queen Gertrude is equally riveting thanks to a simple costume and crown that is bold enough to immediately capture your imagination.

Opening nights are usually scattered with irksome social media influencers, there for their free tickets and to pretend they’re cultured, but halfway through, during intermission, they all escaped the theatre after realising this is not a fluffy musical.

Hamlet is not for everyone – and that’s why it’s important to challenge yourself to watch it. It’s exactly what the theatre space needs right now – it’s striking and special.