WATCH: An adventurer flies over Joburg on 100 balloons 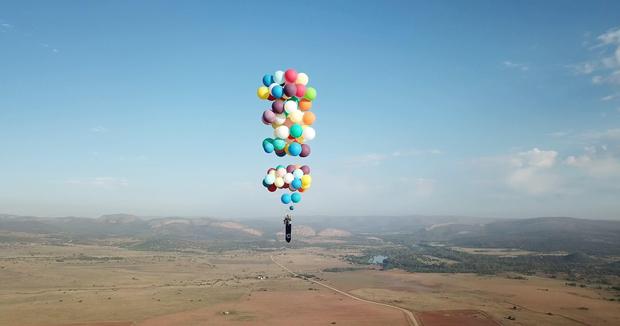 A 38-year-old British adventurer has flown about 2.5 kilometres above Johannesburg attached to 100 helium balloons in a scene reminiscent from Pixar’s much-loved film, Up.

On Monday, Tom Morgan travelled 24 kilometres attached to the balloons, which his team spent two days inflating, after bad weather forced them to move the attempt from Botswana to a location near Johannesburg.

He admitted feeling “somewhere between terrified and elated” as he slowly rose in the air for a period of two hours.

Morgan, who is the founder of The Adventurists, an adventure company based in Bristol, England, is planning to set up the first-ever competitive helium balloon race in Africa.

Speaking to The Telegraph, he said: “It was a fairly indescribable feeling, wafting across Africa on a cheap camping chair dangling from a load of balloons. Sort of peaceful and terrifying in equal measure.

“I came here to see if we could organise the world’s most ridiculous air race and after that flight, I’m more convinced than ever that we can.”

His colleagues still cannot believe that he managed to pull this off and came back alive.

It looks like a scene from the movie Up – but this isn't just hot air. A British adventurer has flown 25km (15.5 miles) above South Africa suspended from 100 helium balloons strapped to a camping chair. It took Tom Morgan two days to inflate them ready for the flight, which he described as "magical". #adventure #flight #hotairballoon #inspiration #challenge #up