It is a festival of colour on the set of I Love South Africa, a game show that celebrates all things South African. 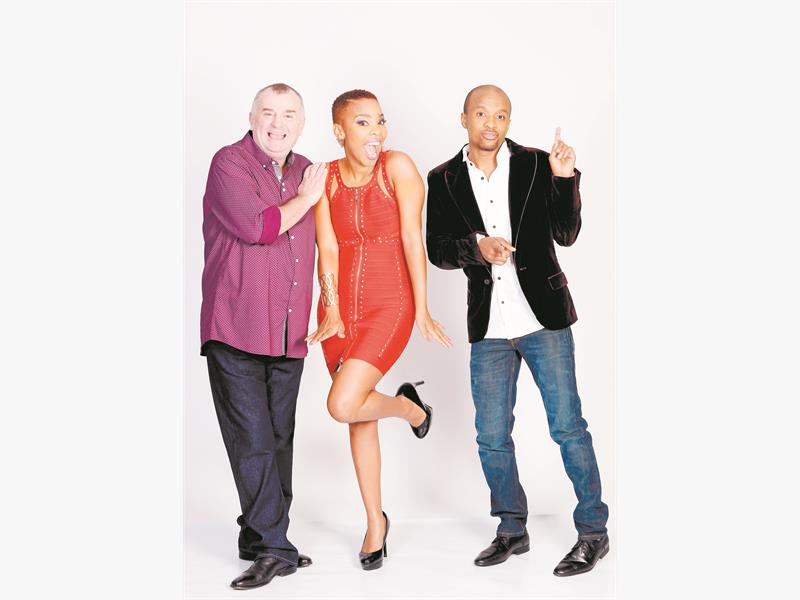 CHEERFUL TRIO. Pictured above from left to right are Mark Banks, host Masechaba Lekalake and team captain Tats Nkonzo on the set of 'I Love South Africa'.

A live band opens the show in happy, jazzy tones, followed by vuvuzelas at decibel levels deemed acceptable for this multi-cultural show. The audiences supporting the two teams in action are clad in their bright team colours and seem more knowledgeable than the typical rent-a-crowd. This is the sort of fare that marketers speak of when they talk of “prime time family viewing” and offer “thrills and spills for the entire family”.

Comedians Mark Banks and Tats Nkonzo function as team captains on the show, while Masechaba Lekalake hosts and directs all the action. The format is fresh and has not been seen elsewhere on South African screens. Each week, six famous South Africans, including athletes, politicians, film stars, TV personalities, singers and musicians are invited to the show.

They are divided into two teams, under the leadership of Banks and Nkonzo.There are six rounds and a finale. Each round has a theme. Within that theme, the teams are asked diverse questions in different formats.

The spelling and “guess the song” components of the show are the most entertaining when taking into account how much we know about each other as South Africans. The words that the two teams are asked to spell are uniquely South African for the most part (terms like bakkie, skorokoro, shebeen etc).

“The great thing about this show is that we get a complete mix of South Africa and it looks like Joburg airport in 2020,” says Banks.

“The element of song and dance, spelling, the various culture and the various languages make for very entertaining television. Most of the time we do not know which guests are coming on the show until the day of the shoot, which means that Tats and I get to improvise and be spontaneous with the members of our teams. It’s easier to look at the other side of things that don’t have another defined side. And if they don’t have one, we invent one.”

In the midst of all the smiles and family fun and games, the show illustrates the disparity in the quality of life among different communities. Given the country’s history, it’s not surprising that a recent episode revealed that black contestants were more knowledgeable about questions around Afrikaans and English culture and language than white contestants were around black cultures and languages.

“We can be 20 countries in one and the Western Cape, Limpopo and KZN can be countries all on their own thanks to their various cultures and foibles. Cape Town is special, and what happens in Limpopo is completely divorced from what happens in the rest of the country. This show is informative in that sense, and we are learning new things about our country as we go along.”