The movie brings nothing fresh or inventive to the horror genre. 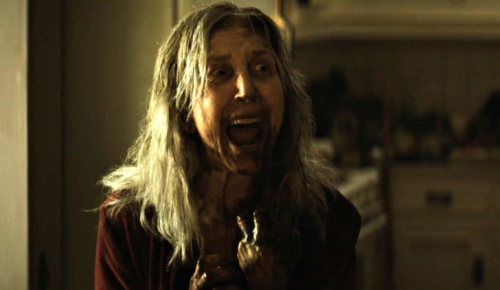 The production begins in Tokyo where a young American mother (Tara Westwood) is departing a decrepit looking house. As she makes her way along the pavement some weird things begin to happen to her. The woman, now firmly back in America, murders her entire family and a detective Muldoon (Andrea Risebrorough) is sent to investigate. But the detective soon discovers that this is no ordinary murder and she is in grave danger herself.

Those familiar with the Grudge series will soon realise that the unfortunate woman has been cursed and has brought back with her a murderous entity, a vengeful ghost that attacks those who live in the house. The legend goes that when someone is killed while in a furious rage it creates an enduring curse, called a “ju-on” or grudge, that pervades a property.

The narrative follows in explicit detail the fate of others who have lived in the cursed house. There are John Cho and Betty Gilpin as young parents-to-be. Then there’s horror stalwart Lin Shaye playing an elderly woman addled by dementia whose husband (Frankie Faison) is concerned about her state of mind. He brings into the house a woman (Jacki Weaver) who specialises in assisted suicides and things don’t go well for them either.

Another horror element concerns retired detective Goodman (William Sadler) who once worked on a case in the haunted house and ended up for his troubles in an insane asylum with a badly disfigured face. Director Pesce (The Eyes of My Mother) plods grimly through the established tropes of the franchise without bringing anything fresh or inventive to the genre. Too many questions remain unanswered at the end, including one from me about the need to make such a trite movie.

'The Wife' reactions: 'Hlomu does not know how to see a red flag'
13 hours ago
13 hours ago

'The Wife' reactions: 'Hlomu does not know how to see a red flag'
13 hours ago
13 hours ago