Lucy: All brain, some pain

Lucy is worth all the accolades it has received so far for sheer guts, talent, innovation and eccentricity. 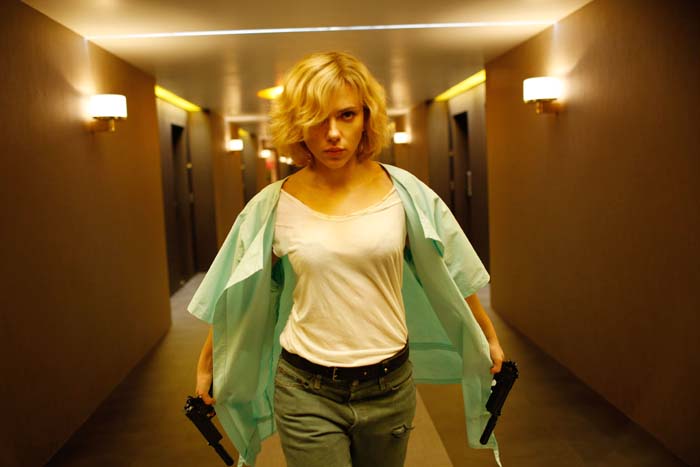 Scarlett Johansson plays a woman able to use 100% of her brain capacity in Lucy. Picture: Supplied

It is not every day that you see a film with so many twists and turns and surprising elements as part of its story.

Lucy (Scarlett Johansson) is an ordinary (but very sexy) young woman who is accidentally infected with granules that boost her brain. Ordinary humans only use 10% of their brain capacity. So what happens when the granules up that number to 20% and above? And why don’t humans use 100% of their brain cells?

Lucy answers that question in a rollercoaster ride that will surprise, dazzle and even infuriate viewers. The last 10 minutes are a psychological trip similar to the end of Contact and even venturing into the same territory as Stanley Kubrick’s masterpiece 2001: A Space Odyssey.

Luc Besson is well-known for his dazzling cinema trips like The Professional and The Fifth Element, and he doesn’t hold back here. He takes you on a psychedelic film journey, although most of it doesn’t make sense at all. This trip will astonish and even confuse you. But it is the journey towards the fantastic climax that forms the spine of a science-fiction film with a difference that dares to go where angels fear to tread – literally.

What works in the film’s favour is the personal touch that Besson manages to bring to it through all the glittering special effects, the break-neck tension and the uplifting material. We care for Lucy as an ordinary girl in an extraordinary situation, racing from one startling adventure to the next one, and we root for her in spite of what she does.

Besson is the master of cool, stylish films in which pretty women kick the hell out of their enemies yet manage to seduce and excite an audience. Johansson is definitely part of this surprising film’s allure. But be warned: it all gets a bit overwhelming in places.