LNN is about more than just laughs

'Late Night News With Loyiso Gola is the first South African television show to do satire and really get it right." That is a statement the show’s host, Loyiso Gola, makes with caution.

The show’s creative director, Kagiso Lediga, is quick to jump in.

“People like Evita Bezuidenhout (Pieter-Dirk Uys) and Zapiro (Jonathan Shapiro) are some of the people who have gotten satire right way before us. They are the ones who paved the way for us to do what we do,” he interjects.

Being nominated for an International Emmy Award for the second time is a huge honour for comedians such as David Kibuuka, Conrad Koch (Chester Missing) and Daniel Friedman (Deep Fried Man) who work with Gola and Lediga on the show.

For Lediga, Late Night News with Loyiso Gola is a lot more than a television show that pokes fun at South African politics. It’s also a platform for up-and-coming comedians.

“The show has been on screen for four years and we’ve done 11 seasons. It’s become more like an institution where young comedians can come, share their ideas and test them out on the show. I don’t know of any other television show that currently offers this to comedians.”

Even though they are two of the country’s most recognisable comedians, with large followings on social networks, Gola and Lediga feel no pressure to be funny all the time.

“I’m not funny unless I’m getting paid to be funny,” says Gola. 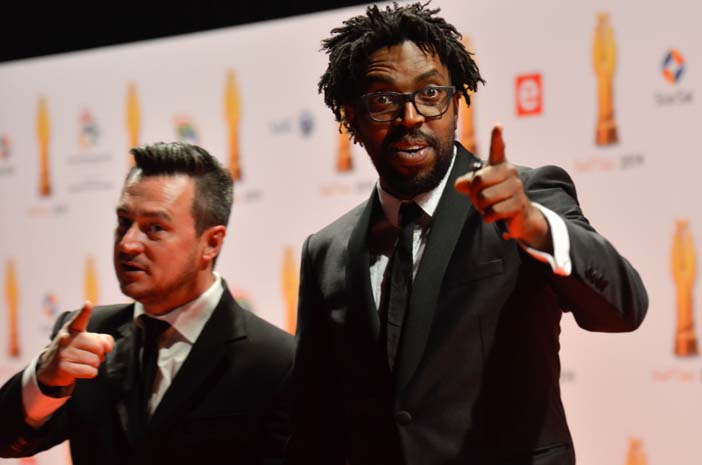 “If there is no invoice, I’m not interested. Obviously people expect comedians to be cracking jokes and laughing all the time, but I believe comedy dies when people say things like, ‘Tell me a joke’ or ‘Make me laugh,’ because then they’re expecting it.”

Unlike people in other professions, comedians and singers are very often expected to “do the job even when they’re not on the job” explains Gola.

“These days, when you’re not jumping up and down like a monkey when people see you, then they believe you’re depressed. In fact, the belief that comedians pretend to be happy while they are suffering from depression is the biggest misconception about comedians. There are depressed people in every field.”

Speaking on his future plans for Late Night News, Lediga says: “It would be nice to create content that not only speaks to our audiences in South Africa but also to those in other African countries. We want to grow our audiences and make sure the show is on air for many more years to come.”