Macho muscle fest at the movies

This muscle bound testosterone feast is the perfect companion piece to The Heat. 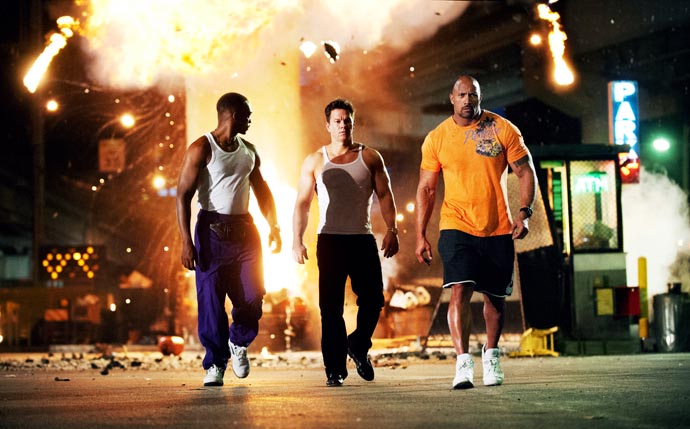 I would suggest that the girls venture into Cinema Two to participate in Melissa McCarthy and Sandra Bullock’s hysterical antics, while the tough guys choose Pain and Gain, the Mark Wahlberg/Dwayne Johnson tough-talking adventure. Whichever one you choose, you’re in for a sturdy ride!

Based on the true story of Daniel Lugo (Mark Wahlberg) who enlists the help of an ex convict and a body builder to make a quick buck through extortion and kidnapping, Michael Bay has turned his life story into a gross-out black comedy that goes for the lowest common denominator.

This is the kind of explosive macho, barbed-wire entertainment you chew on between a braai, a rugby game and a snooze before hitting the gym. The film is predictably rough and drenches the viewer in violence, fist fights, car chases, kidnapping and any other violent crime you can imagine. (It is a Michael Bay film after all!)

There is ample display of sweaty muscles and bulging biceps in every scene, so even the ladies who dare to accompany their husbands or boyfriends into the cinema, may at least have eye candy to survive the ordeal.

The film is a blatant celebration of machismo and masculine superiority with its daring adventures and bold moves, as it rushes from one scene to the next as boldly as testosterone shoots through a rugby player’s body.

The one-liners are crude, hard-hitting and occasionally funny. Come to think of it, what would a macho comedy be without throw-away lines mumbled through designer stubble? The film boasts a razor-sharp energy as it dehumanises the enemy so that we cheer and laugh at their demise and celebrate it with a high five.

It provides an outlet for anybody who has enough built-up energy to party through the weekend yet need a quick movie breather in between. So if you want an easy laugh, high-octane action, and muscles decorated by mean tattoos, this is your movie!