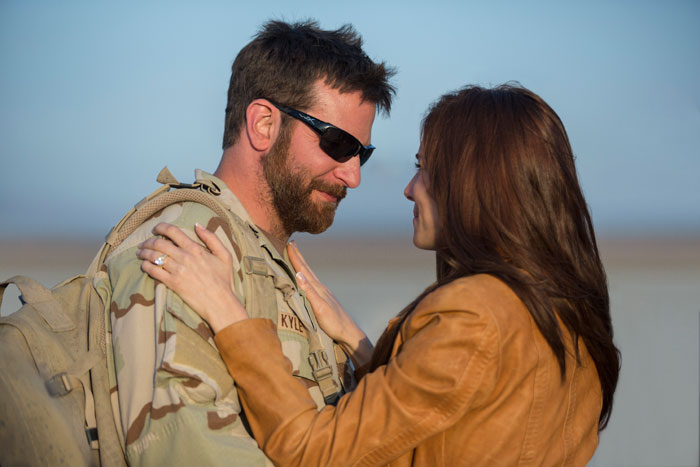 What was it about Chris Kyle’s story that resonated with you and made you want to bring it to screen?
Cooper: I liked the fact it’s not a movie about war so much as a character study. Chris’ story is a universal one about what veterans have to go through, really – the idea of dealing with the emotional seesaw of going into a warzone to fight and then coming home, back to your family life, and the challenges that experience presents to all our soldiers.

When you were developing the movie, you met Chris and his wife, Taya. What was that experience like?
Cooper: No book could ever really give you what you get from meeting people in the flesh. You just watch the way somebody moves through the house and it tells you a lot. The great thing was there was so much source material. There were videos and all the interviews that Chris had done, all the photographs and e-mail exchanges. I mean, Taya really opened up her life to us. She was a major reason why we were able to take so many specific things about him that actually made it into the movie. There are a handful of scenes that came out of that weekend we spent in Texas where she was just telling us stories about their relationship.

What type of Seal training did you do to make this film?
Cooper: I had three months to train. I had to choose what to become comfortable with, and that was the three weapons, the three sniper rifl es, the Mark XI, the .338 Lapua and the .300 Win Mag, and being dexterous with those three. Because that’s what you’re watching – him on the gun. I really focused on getting into the mindset of what it would be to be a sniper, not so much about the training of becoming a Navy Seal.

Working with Clint Eastwood, what do you take with you?
Cooper: He’d probably hate that I’d say this, but the fact that I love him to death, and we’ve had so many moments and we laughed a tremendous amount in the movie, which may be shocking given the content. But I think that’s probably why he gets so many great performances out of people – because he makes them really feel at ease.