I recently saw an interview with Sean Penn on The Graham Norton Show. 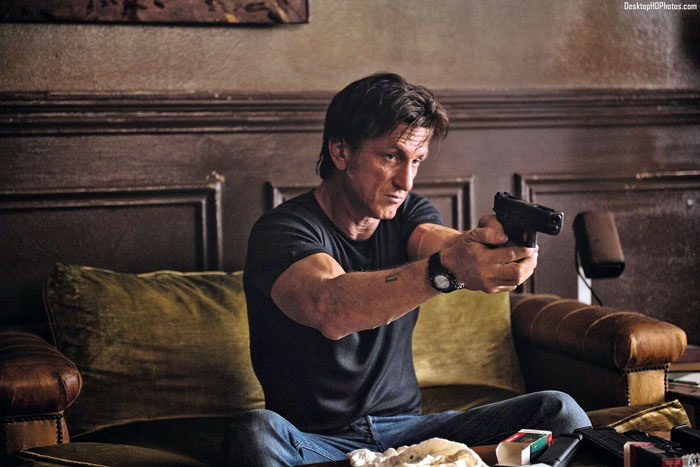 GUN IN HAND. Sean Penn stars as Terrier in this grim and depressing story.

It was actually the first time I saw this respected and solemn actor manage to smile – and for a moment I could believe he can actually smile and mean it. He could even make a joke about his daughter’s boyfriend that had the audience giggling nervously.

Apart from the odd Woody Allen outing, he rarely tackles a comedy and probably cannot deliver a really funny one-liner with a gun to his head.

And speaking of a gun: In this film Penn plays the part of a man named Terrier, a hired assassin who is married to his weapon in this grim, violent and depressing film about a mercenary in the Congo who is hired to assassinate the minister of Mines. He then has to flee for his life. The Congo is rife with chaos, bloodshed and corruption and our hero (or antihero?) finds himself right in the middle of it all, underestimating the grimness of politics and greediness there.

Of course, being a commercial film, there is a girl in the picture to deliver some welcome eye candy and the odd sex scene in a tough film with stubble-infected characters who manage to mumble a few growling threats and macho-dialogue before being swallowed up by the bush for more killings.

Like in Blood Diamond, Africa has now turned into a convenient alternative location if American filmmakers want to set a story in a war-torn country outside of Iraq, where death, destruction and anti-US sentiment drive the plot to its logical and bloodthirsty climax.

This is not a movie I would waste my money on. It has very little to do with Africa’s real problems (and boy, are there an abundance of them) but simply uses the continent – in this case the Congo – to provide the setting for a lawless platform, like in the old Westerns where people can legitimately kill each other and get away with it.

Not that Penn as Terrier completely gets away with it. After hitting his target (in a well-directed and quite taut scene) he has to flee the country for his own safety – only to re-emerge again many years later with himself as the target of an even crueller assassin than he could ever hope to be.

If you know Africa and have experienced some Africa-as-the-bad-guy movies in the past, you will know exactly what to expect.

Just one thing: for a 55-year-old man, Penn is still in great form. But this role provides no new tests for his acting skills except a furrowed brow and a dark, menacing look between the wrinkles.

Talk about a lived-in face. It often says more than pages of dialogue can deliver. And if you go, that might be the only positive aspect to this forbidding, gloomy film.