Those of you who are suffering from film noir withdrawal symptoms, this one could be described as film noir light. 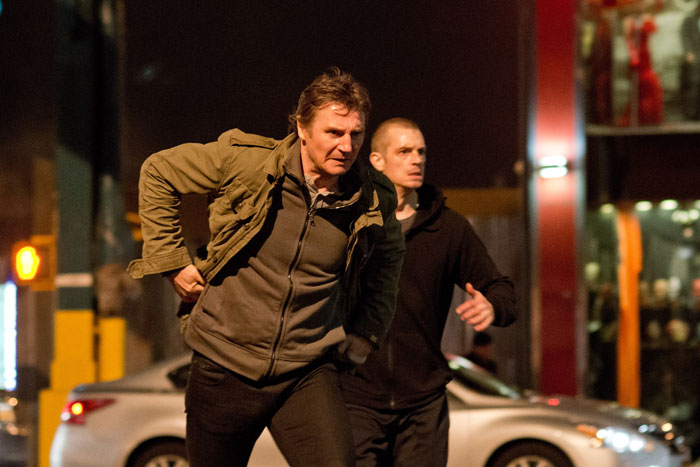 With its dark shadows, neon infested streets and shadowed souls, it valiantly tries to reinvent a kind of modern-day noir, but doesn’t quite pull it off. At heart, it is just another action crime thriller riding on the back of Liam Neeson’s current superstar status.

Unfortunately, viewers will not find Neeson as appealing as his Bryan Mills character in Taken. He is much darker and more obsessed than in his previous hero outings and is not an appealing character at all. So it is quite difficult to endure this violent journey with him for almost two hours, because the viewer is not on his side.

Neeson is Jimmy Conlon, a mobster who is involved in a fight with an old mobster friend, played with gritty roughness by Ed Harris. But the war is more complicated than a mere “mine is bigger than yours” fight. Conlon’s son, played by the exceptional Joel Kinnaman, is almost killed by Harris’s son, played by Boyd Holbrook, so Conlon has to kill the boy. And this is where the trouble starts.

The problem is: we have seen Ed Harris and especially Liam Neeson play these characters, or clones of them, several times before, so we are acutely aware of two actors cruising along on autopilot. They are just repeating the same worn-out techniques used in several other similar films before and seem to get bored and a little exhausted with it.

So the movie belongs to the younger generation, especially the commanding and haunting-looking Joel Kinnaman as Conlon’s estranged son. The film is maybe worth watching, if only for his honest and captivating performance, while young Boyd Holbrook, who at first seemed like just another piece of eye candy, also commands the attention and makes the first part of the film durable before he unfortunately gets knocked off.

I would not give up my binge-watching of Game of Thrones for this one. But if you have seen Fast and Furious more than seven times and are in need of alternative violent action with car chases, then this one might suffice. But Neeson now needs to play a well-rounded and strong character again. He is wasting his talents and authority on films that require little more from him than pinning bad guys against the wall with his dark eyes and whipping them into shape with his tongue. And not forgetting the occasional bullet and sharp fist against the chin.

This is an okay film, but not really worth spending R60 on.