Pastor Penuel Mnguni is not the first religious leader to introduce snakes into his sermons. 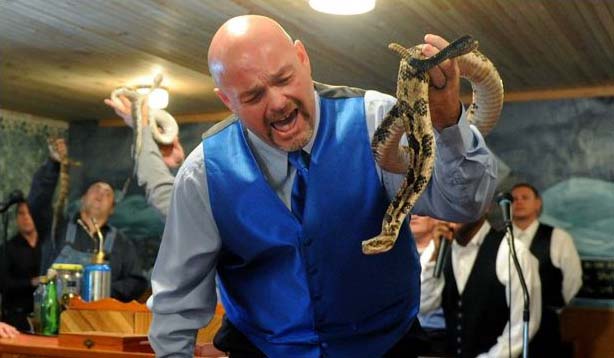 A Pentecostal pastor in Kentucky, USA, used venomous snakes during his sermons and eventually died because of the practice.

Pastor Jamie Coots died last year after refusing to be treated, according to police.

Coots believed in “snake salvation”, derived from a passage in the bible that suggests poisonous snakebites will not harm believers as long as they are anointed by God.

The practice has been declared illegal in most states, but this has not stopped many believers from partaking in this ritual.

The church uses the snakes during sermons, with devotees handling them, dancing with them and chanting.

Coots also featured on a National Geographic show called Snake Salvation which featured the pastor handling all types of venomous snakes from copperheads to rattlesnakes.

Meanwhile in South Africa, Mnguni allegedly told his congregation that he had the “the authority to change everything into anything and it will obey because of our authority”.

As such he declared a snake a bar of chocolate for the congregation to eat.

This is not the first time Pastor Mnguni has done something out of the ordinary. It was reported earlier this year he ordered his congregants to take off their clothes before sitting on top of church members and praying for them.

Mnguni is the understudy of Rabboni Ministries leader Prophet Lesego Daniel, who made headlines a few years ago for making his congregation eat grass.

Last year, it came to light that he had begun making churchgoers drink petrol. He told his congregants the petrol would turn into Fanta Pineapple flavoured drink.