Marie Claire SA has been under fire for their Women's Month campaign against women abuse, using men in stilettos, including DJ Euphonik. 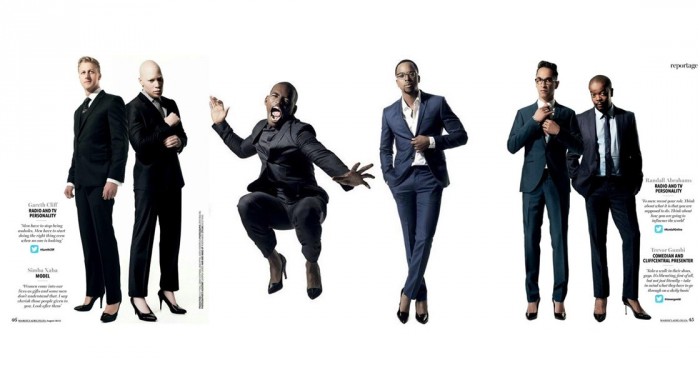 Randall Abrahams, Gareth Cliff and Maps Maponyane are among the men included in the cover wearing stilettos.

Some people have commended the campaign, thanking the magazine for standing up against women abuse and using men to send that message.

The magazine has, however, received criticism for including DJ Euphonik on the list of men who stand against women abuse. The popular DJ was romantically involved with presenter Bonang Matheba and their relationship ended on a sour note, as Matheba alleged the DJ had physically abused her.

The cover has been criticised for using the “male stamp of approval” to show that violence against women is unjust. Their argument is that they used men and included a man with a history of abuse to validate women abuse, thereby undermining the message of the whole campaign.

In Marie Claire’s post, DJ Euphonik is quoted as saying: “Violence against women is probably the greatest injustice in the world”.

An argument raised in support of DJ Euphonik is that he admitted to his mistakes through his involvement in this campaign.

'Violence against women is probably the greatest injustice in the world.' @euphonik stands tall for women in our August issue. #MCInHerShoes

I will never understand why we need the "male stamp of approval" to show that violence against women is unjust? Marie Claire SA: FAIL.

There was a time when I absolutely loved Marie Claire's content – in fact I still do, that 'men in heels' campaign is a big sham though.

I am so glad so many are taking a stand against that ridiculous and insulting Marie Claire campaign. We seriously can't go on like this…

Marie Claire maybe you can use Bill Cosby in any anti-rape campaign you run, after all it's not really about the women with you is it?

So Marie Claire has no black women in any decision making role that would have told them about the epic fail feat. @euphonik would be?

So Marie Claire doesn't see anything wrong with including Euphonick (sp) in the #MCInHerShoes campaign.

Share your thoughts, was Marie Claire right in using DJ Euphonik in their campaign against women abuse?

The Boity-Bujy altercation must be labelled correctly
1 week ago
1 week ago
PREMIUM!

Polygamy: Women should be freed from chains of abuse disguised as Culture
1 month ago
1 month ago

The Boity-Bujy altercation must be labelled correctly
1 week ago
1 week ago
PREMIUM!

Polygamy: Women should be freed from chains of abuse disguised as Culture
1 month ago
1 month ago