Bedroom lessons for makoti on Our Perfect Wedding

As usual, Our Perfect Wedding was trending last night, let's see if it was perfect, or not. In this week’s episode, we met Stephen Motoma, 32, and Mmasetshaba Mphela, 24. Stephen got Mmasetshaba’s number from a friend, who he bribed with a 2l bottle of cold drink.

You’re probably thinking he then called her and introduced himself, asked her out on a date, right?

You’re wrong, he sent her a message on WhatsApp, in fact, most of this couple’s conversations and important decisions were discussed via WhatsApp.

Stephen even proposed to Mmasetshaba via WhatsApp, which she thought he was joking of course, until he finally made that call to tell her the elders were coming to her place for lobola negotiations. This is when it all started.

Talking about the wedding:

Mmasetshaba has a sister, Gontse. She insisted to be a bridesmaid, which is normal, especially if you’re the only sister. I also have been insisting to be my sister’s bridesmaid when she decides to tie the knot, I’m the only younger sister she has, so she has no choice.

Not only was Gontse a bridesmaid, she even designed the bridesmaid dresses, she did a great job. Again, as a younger sister, I’ve been calling my sister and ‘suggesting’ the theme and all other things concerning her wedding, see dear sister? It’s normal. 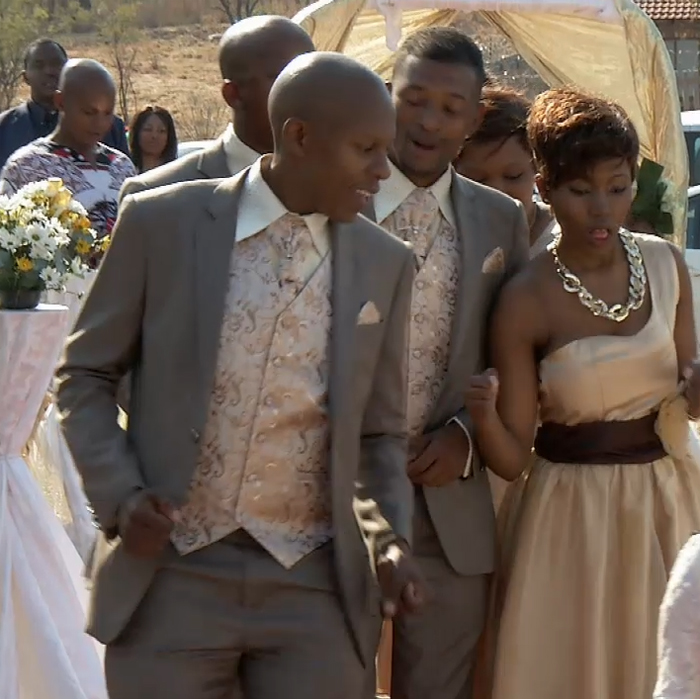 I actually liked the bride’s dress, it was beautiful. I also wish I could lose that much weight within a week, I mean, the bride tried on her dress the week before and it was fine, but the day before her wedding it was a bit big?

The bridesmaid dresses were not that pretty, prettier without the capes though, I didn’t get the whole idea of having capes.

I will not comment on the maid of honour’s dress, what happened there? I guess Gontse was not given the mandate to monitor things that side.

The traditional blue and white outfits were beautiful, the bride’s one even more beautiful, it suited her perfectly well. I give those outfits 10/10, they were the best I’ve seen so far. Younger sisters stay winning! 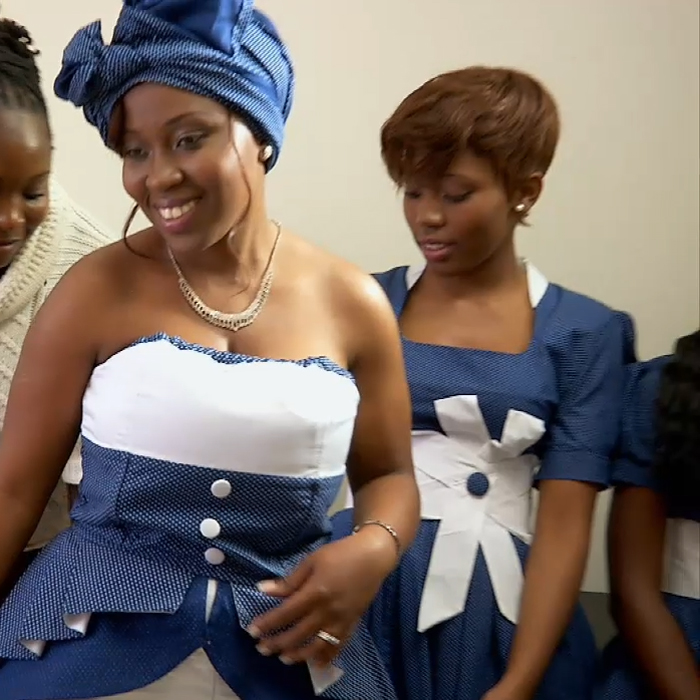 The groom’s suit was nice, it fitted him perfectly.

The groomsmen suits were also nice, I didn’t like the waist coats, too busy for my liking, and very bright, but when hidden underneath, they looked lovely.

Last night’s decor lady got me thinking, when last did we hear the “everything will be fine in the morning” speech from the décor ladies? Hah! but she surprised me, she finished on time and the decor was beautiful, everything was perfect! As much as I MIGHT speak at my sister’s wedding as a bridesmaid, I promise not to cry like Gontse, that speech was painful, what happened to celebrating?

Coming to the speakers, hey! my head was spinning. Some things must be said at bridal showers you know? You can’t be giving the bride sex lessons at the wedding when there are kids around. This is what the groom’s sister said, and I quote:

“T.D Jakes said you must be a B**** in the bedroom, if you want to keep Stephen around, uyi tjukutje.”

Don't ever underestimate this bottle, 2L not 500ml…it can get u a wife or a husband! #OPW #OurPerfectWedding pic.twitter.com/OlOkVFLeb5

A man who loves you won't ask you to put your studies on hold for him. Just saying. #OurPerfectWedding

so your sister is not supposed to get married cause u r single?? Haai sisi#OurPerfectWedding pic.twitter.com/fizcRT9dyC

What did you think of this advice? Share your thoughts on the comments below.