Sunday night's episode of Date My Family was an entertaining eye-opener for many South Africans. Firstly, the person said to be looking for love was a a gay man. If memory serves correctly, this was the first episode ever on the show that has helped a gay person looking for love. Cyanda Goodlove presented himself as a hard-working artist manager who has been single for three years and is looking for love in the city of gold.

He stated throughout the show that he is from Newcastle in KwaZulu-Natal. Each and every family he shared a meal with was entertaining. Cyanda was very outspoken about what he wanted, how he wanted his potential partner to look and did not hold back when he was dissatisfied. When dissatisfied, he spoke out about dusty plates, how he doesn’t eat chilli food, not wanting to pray and his insistence on having a glass of wine whenever he ate.

Most of the family members were diplomatic about their reactions but some voiced his apparent rudeness. Cyanda continued to say that he did not come to Joburg to have a potential lover who stays in the township. He criticised where two of the potential dates stayed and seemed to not be impressed altogether.

The person he picked to go on a date with was a gym instructor who, according to Cyanda had a pot belly, and he let him know he was not impressed with that. At the end of the show, he had memorised a potential lover’s phone number on the palm of his hand.

As per usual, Twitter was the venting place for all and sundry. Here is what it had to say about Cyanda and his mannerisms.

Cyanda Gudluv was on 3Talk a few years ago saying he has a sugar daddy who gives him R100k. Now he's on #DateMyFamily looking for love?

Notice how they always have steak with veggies at this restuarant!? is there no other option!? #DateMyFamily

I didn't come to Jhb to date a person from Sebokeng but you got only 4 pairs of shoes… ???????? #DateMyFamily

So what we learnt from #DateMyFamily: Gay men don't date "girly" ones. They all want their perception of a MAN. Sad.

#DateMyFamily #Siyanda can have all the fame he wants but I won't forget. he robbed us my parent's paid him 2k every month

If Siyanda was a heterosexual we would label him as rude. But because he is gay we say he is feisty… I stick with rude #DateMyFamily

I don't think tonight's show helped in getting SA enlightened about homosexuality, it left everyone even more confused ???????????? #DateMyFamily

These ladies talking about tops and bottoms?! Hahah we've progressed as a society hey lol #DateMyFamily

It's a beautiful thing that Kefue has a family unfazed by and accepting of his sexuality. Sexuality shouldn't define us. #DateMyFamily

Taking a bullet for flirting
1 week ago
1 week ago 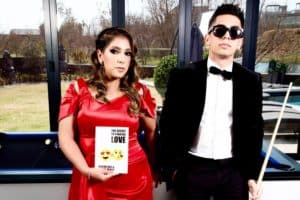 Taking a bullet for flirting
1 week ago
1 week ago