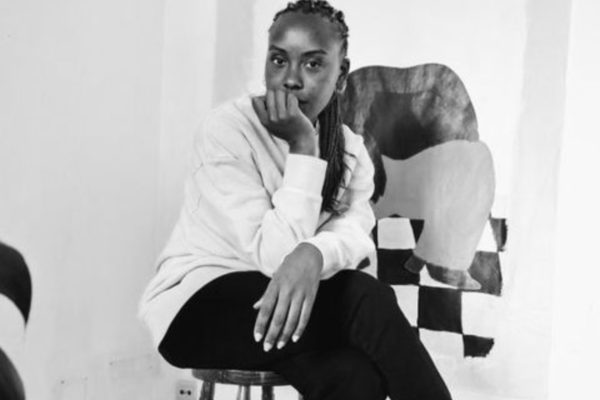 Ever since the Black Lives Matter movement was born, there has been a spike in interest in black artists across the world, says Belgium-based Congolese-born artist Bahati Simoens.

Simoens joins six other artists in a group exhibition titled Ndoimadzi, or “unstoppable force”, in Johannesburg now on at the Botho Project Space in Eloff Street, Johannesburg until 26 June.

The theme of the exhibition resonates with Bahati who feels while African-origin artists may have been around for ages, “we are finally getting noticed.” She says this has been the case in exhibitions across Europe and other territories.

“I love being on African soil though, engaging with fellow Africans and feeling at home,”

She adds that “for me, it’s just it feels like more of a recognition for me as well, like it would have been different if it were in Europe as opposed to having the exhibition here and just connecting with a lot of people.”

She says that as a black artist living in Europe, a strong sense of isolation can sometimes overwhelm.

She feels that in Europe people do not necessarily resonate with deeper aspects of her work as an artist with an African heritage. “They don’t completely get the whole feeling or parts of the emotion are lost when looking at my work.

“At the opening of this exhibition, in Africa, I talked to a lot of people and I was very, very happy because they got my work when they were, like, explaining how they were feeling and how it impacted them in the moment.”

Simoens says her inspiration lies in her roots and present day. “It’s actually mixture of both. It’s mostly like childhood memories, stories from my mother when she still lived in the Congo and then Belgium, combined with my own experiences and just trying to create like a fantasy world for myself, the world that I would like to live in.”

Alongside her, the showcase ranges from Thoka’s mixed media use of prison and Basotho blankets through to a look at popular culture’s influencers by Tlabela. Lulama Mlambo explores the human condition underlined by a black-woman narrative from Zandile Tshabalala. Artist Zwelethu Machepha partners with Themba Khumalo for his contribution.

The exhibition is labelled a “state of focus and commitment as we cling firmly to our own brilliance and destiny”. This is alongside the separation and isolation caused by the pandemic, which has impacted much of the head space of many artists.

“I know all about isolation,” says Simoens, “and my work expresses not only that, but the various shades between the darkness and the light.”

Collectively, the exhibition is an ensemble of introspection and creativity.