A tabloid report suggests there's a bit of controversy that Robert Marawa hasn't actually proposed to his alleged girlfriend. Weekly tabloid Sunday Sun has added another level of intrigue to the rumours around Pearl Thusi being engaged to her alleged lover, popular sports presenter Robert Marawa.

According to sources the paper spoke to who claim to be Marawa’s friends, it wasn’t Marawa who bought the “shiner” on her ring finger, but Thusi herself.

One source told Sunday Sun that, to him, “it screams desperation” and Thusi was “too hot to be doing that”.

The rumours around the engagement started during the SA Music Awards weekend in June, when Pearl was photographed flashing a shiny piece of jewellery on her ring finger. The bling immediately caught red carpet correspondent Minnie Dlamini’s eye, who quizzed the actress/model/presenter about this while interviewing her for E! Beyond The Red Carpet. 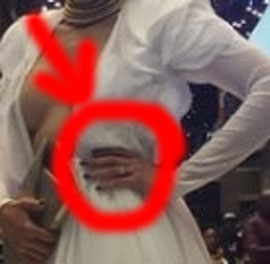 “Somebody special may have decided that I needed a special type of jewellery,” she replied.

Although the picture is a little blurry, you can clearly see the bling on the TV personality’s left ring finger.

Marawa’s friends were apparently “disgusted” that the beautiful Lip Sync Battle Africa host would “stoop as low as buying herself a ring claiming she’s engaged to the sports presenter”, they told Sunday Sun.

Hilariously, they are also apparently calling the ring “such a small little thing”, and that Marawa would never be such a cheapskate in the jewellery stakes.

Apparently Marawa told them that although he was in love with Thusi, he was “not ready to commit”.

The couple have been seen being intimate in public together, but neither has actually confirmed being in a relationship, reportedly because of how private Marawa is.

Marawa supposedly told his friends that he understood her purchase of the ring to be a ploy to “create hype for her brand or to chase other guys away”, according to the one source the tabloid spoke to.

Neither Pearl nor Robert were willing to officially comment on their “engagement” or where the “ring rumours” came from, but Pearl once again alluded to their relationship on Phat Joe’s Metro FM show on Saturday when she confirmed that her love interest was “a tall, handsome man who knows a lot about sports”.