Though his dreams may have scared her in the past, Dr Tumi says his wife is in the same space as him now and is always willing to jump off the cliff with him. 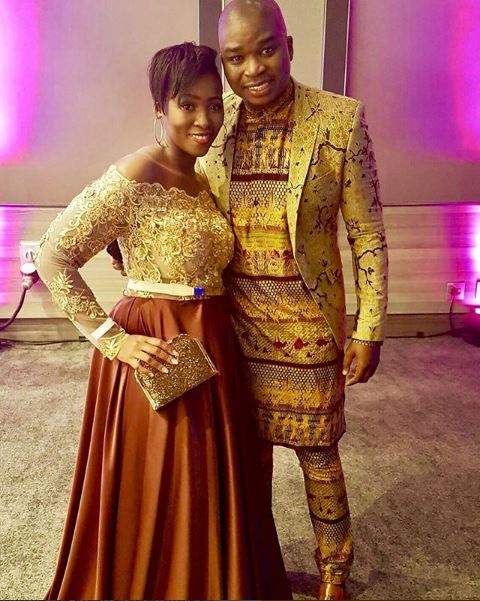 Multiplatinum-selling and award-winning gospel artist Dr Tumisang Makweya has opened up about the role his family played, and still plays, in building the success of his music career in an interview with Anele Mdoda.

Though we don’t get to see her much in the spotlight, Dr Tumi says his wife, Kgaogelo Makweya, who he married in 2008, is very involved in his career. In fact, she’s the driving force behind it, as she plays a role of a wife and manager at the same time.

Keeping her husband strong is not the only thing Kgaogelo does, as she is also a businesswoman and founder of Ekse Hello, a branding and marketing company.

“My family is very involved, my wife is very involved, she’s my manager as well. She comes in, and she’ll tell me: ‘Okay, this is good, we’re ready.’ She’s been involved in the whole process. She’s the first person I bother with anything. I tell her, and if she says: ‘I think it can be done,’ I have more peace than anywhere else because I’m gonna have to deal with her throughout the process,” he says.

The Nothing Without You hit maker says his wife is not afraid to achieve anything anymore, as she’s in the same space as him.

“I tell her first in most instances that: ‘I’m thinking this,’ and I think if there was a point in her life that she used to get scared, at this point she knows I go for what I believe, so she doesn’t get scared anymore. She’s also in the space that I am, so we talk and we just get it done,” he says.

Though he leaves his family often for travel and always compromises on their time together, Dr Tumi says he tries to make time for them. It’s not too bad for his wife, as she’s his manager, so she’s always there and gets to experience a lot with him. He says he took his children to his Gathering concert because he thought they had to be there for it.

We also learned a few things about the doctor:

Dr Tumi is a hopeless dancer! “I hear the beat, but it doesn’t get to the feet. I try everything not to dance,” he says. He took dance lessons for six, and still couldn’t make it.

He played soccer at provincial level. He may not be able to dance to save his life, but soccer is what he’s really good at. He tried rugby, basketball and swimming, and he was terrible at them.

His father bought him his first keyboard when he was nine.

He taught himself to play the keyboard. “I just learned to fiddle, and then I figured out a couple of chords, spread that out and started listening to a lot of music and learning. I then started playing at church, lot of training was in church.”

Though he acknowledged his son’s love for music, Dr Tumi’s father always wanted him to be a doctor.

He loves people, which explains why he studied medicine. “I’ve always wanted to serve people, so that was training in itself because I did a couple of years in that before I went into music, by then I learned that you always have to look after lives. It’s important to maintain relationships and connect with people. I just love people, they’re important.

He left medicine because he couldn’t cope. “I was at the practice, and I would leave at 6pm or 7pm every day, get home and have tons of work to do.” On weekends, he used to do four to five gigs. “I was away during the week, I was away during the weekends. My weekends were hectic, then I started going to work late then I knew something is kicking in that I don’t even understand. I started getting to work at 1, because you’re tired.”

He wouldn’t go into R&B because he thinks he would be trying to be someone he’s not. “There’s already someone called to do that. I’ve written love songs, I can write anything if you give me a theme, but I choose to do this because I believe this is my calling, and this is how I’m supposed to give out to society, and I do what I believe I’m called for. Maybe in another life I would come back as an R&B singer.”

He has a foundation, and right now he’s focused on providing sanitary towels to girls. “I really want to make sure that no one feels embarrassed in class or wherever because they don’t have them.”

He handles his social media accounts. “These people are looking for me and I have a minute to spare, so I do it myself. I actually talk to people on inbox, try to respond to as many as I can.”

Dr Tumi fills up the Dome