Fashion is often hit or miss – a bold choice could either see you heralded as a trendsetter or labelled a fashion fail. 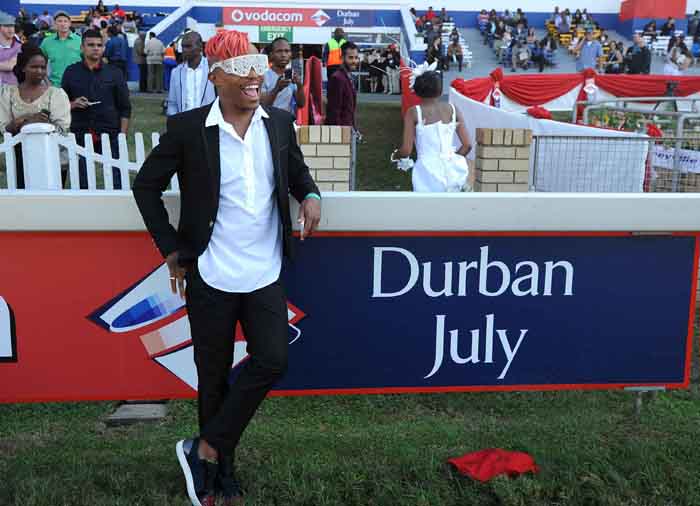 FILE PICTURE: Television personality and choreographer Somizi poses for a picture at the 2014 Vodacom Durban July during the best dressed parade at the Greyville Racecourse in Durban 05 July 2014. Picture: Refilwe Modise

Playing it safe may seem to be the best option when faced with an uberglam event. However, this often makes things quite dull.

While many were excited to bet on some of the world’s best horses at last weekend’s Durban July, others couldn’t wait to make their way to the racecourse in their most flamboyant garments. Feathers, fur and fascinators were the order of the day, with many people trying to incorporate the day’s theme: “The Big Screen – Hollywood, Nollywood and Bollywood.”

“The Durban July is the one event where you don’t want to play it safe,” says fashion designer Gert Johan Coetzee.

While most local celebrities managed to look “nice”, very few were able to turn heads (as is expected at the most glamorous event of the year). Television presenter Minnie Dlamini, who is usually dressed by designer Asanda Madyibi, opted for an itsy bitsy David Tlale dress this time.

“I love this look on Minnie because it’s age appropriate and fun with a touch of glamour,” says fashion stylist Khanyi Nngoma.

Miss South Africa Rolene Strauss stuck to the theme in a 1920s glamour-inspired dress by local designer Anel Botha. She was among the few celebrities who decided to wear a fascinator – the accessory which symbolises horseracing event fashion around the world.

“Wearing a fascinator is always risky,” says fashion stylist Tebello Radebe. “It can easily make your entire outfit look outdated. People wear the fascinator because they feel like they have to, but it is possible to look great at the [Durban] July without it.”

“Many people struggle to incorporate an event’s theme without looking like they are wearing a costume,” says Ngoma. “Jeannie D channelled old Hollywood style, yet still managed to look glamorous, modern and edgy. She was definitely among the the day’s best-dressed celebrities.”

When it comes to men’s fashion, most tend to keep it simple. Actor Tumisho Masha looked relaxed and stylish. While his wife Zozibini’s red dress was striking, it didn’t get the best reviews.

Actresses and best friends Nomzamo Mbatha and Jessica Nkosi complemented each other beautifully in their gowns, but according to Ngoma they played it too safe.

“I liked the colour of Nomzamo’s dress and the fit was just perfect. Jessica was just too covered up and her outfit looked more suitable for a matric farewell ceremony. There was nothing edgy about it.”

Sonia Booth, who attended the event with her husband, Matthew, was also among the worst dressed.

“I don’t know where to begin,” says Ngoma. “Sonia’s shoes, skirt and belt are all wrong, Matthew tried to dress for the occasion.”