Markle is set to possibly testify against his daughter in court as a key witness in the couple's battle against media publications. 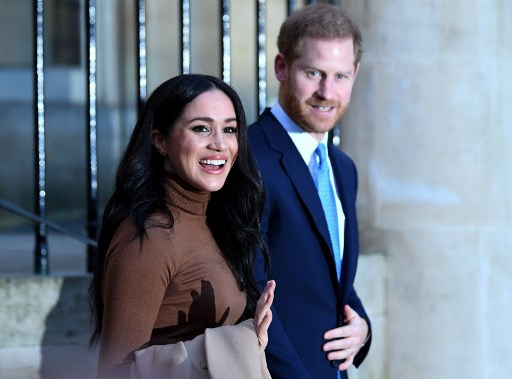 Prince Harry, Duke of Sussex and Meghan, Duchess of Sussex react after their visit to Canada House in thanks for the warm Canadian hospitality and support they received during their recent stay in Canada, on January 7, 2020 in London, England. Picture: DANIEL LEAL-OLIVAS / POOL / AFP

“I’m 75 years old. It’s time to look after daddy,” Thomas Markle says in the controversial Channel 5 documentary Thomas Markle: My Story that aired in the UK on Wednesday night. The 90-minute documentary was filmed in the retired TV lighting director’s home in Mexico over six days in October.

According to The Washington Post, Markle admits on camera that he was paid for the interview, saying: “I’m going to defend myself and I’m going to be paid for it. I don’t care. At this point they owe me. The royals owe me. Harry owes me. Meghan owes me. For what I’ve been through, I should be rewarded.”

Independent reports that Markle confesses in the documentary that he lied to Prince Harry about staging paparazzi photographs of himself in the days prior to the royal wedding. “I lied to Prince Harry. I’m not proud of that, but I did,” he said. Markle also revealed that the last time he spoke to Meghan was over the phone shortly after he had suffered a heart attack and informed her that he was too unwell to attend her wedding. Meghan’s father has been using the spotlight to bash his daughter who recently announced alongside her husband Prince Harry that they would be stepping down as senior members of the royal family.

“I think both of them are turning into lost souls at this point,” Markle says in the documentary.

Channel24 reported earlier that Markle is set to possibly testify against his daughter in court as a key witness after Prince Harry announced in October last year that the royal couple will be suing multiple media publications for their deliberate misrepresentations of the royals. Prince Harry said the couple would also take legal action over the contents of a private letter that was “published unlawfully in an intentionally destructive manner”.

The letter was one Meghan sent to her estranged father that had “purposely misled you [the public] by strategically omitting select paragraphs, specific sentences, and even singular words to mask the lies they had perpetuated for over a year”. Buckingham Palace on Saturday night released a statement in which the queen accepted Meghan and Harry’s split from the royal family.

The statement read in part: “Harry, Meghan and Archie will always be much loved members of my family. I recognise the challenges they have experienced as a result of intense scrutiny over the last two years and support their wish for a more independent life. The queen added: “I want to thank them for all their dedicated work across this country, the Commonwealth and beyond, and am particularly proud of how Meghan has so quickly become one of the family.”

Harry and Meghan will, as part of the split agreement, not receive any royal funds and won’t be able to use their HRH titles.