Liebenberg claimed her husband of 10 years, Nicky van der Walt, had an affair with Emily Kark. Emily Kark, who was insinuated to be the ‘other woman’ in Lee-Ann Liebenberg’s marriage drama has accepted the model’s apology.

Model Lee-Ann Liebenberg caused a stir the past week when she claimed her husband, businessman Nicky van der Walt had an affair. She took back her what she said and apologised to Kark who she publiciy named as one of the reasons she was ending her 10 year mariage.

“We confirm that Ms Lee-Ann Liebenberg (“Liebenberg”) made baseless, dishonest and defamatory claims on social media about Ms Kark on 2 July 2021.  Said claims were devoid of any merit and made with the sole intention of causing reputational harm to Ms Kark, who was forced to seek urgent legal assistance in order to protect her reputation and dignit.

“Ms Kark accepts the apology and retraction of Liebenberg, regards this matter as being finalised and will not be making any statements to the media . She is now putting this incident behind her and returning to her life with her family.”

The mother of three took to Instagram to announce her spilt to van der Walt, dismissing comments she had been hacked, then tagging the supposed mistress.

“I have not been hacked… Emily_Kark you can have him”, wrote Liebenberg. But suddenly on Monday evening, she retracted the statements and apologised to Kark. The apology came after Kark sent a lawyer’s letter demanding she do so. Kark said: “The apology is the result of legal action taken by me because of the completely baseless and untrue defamatory allegations levelled against me.” 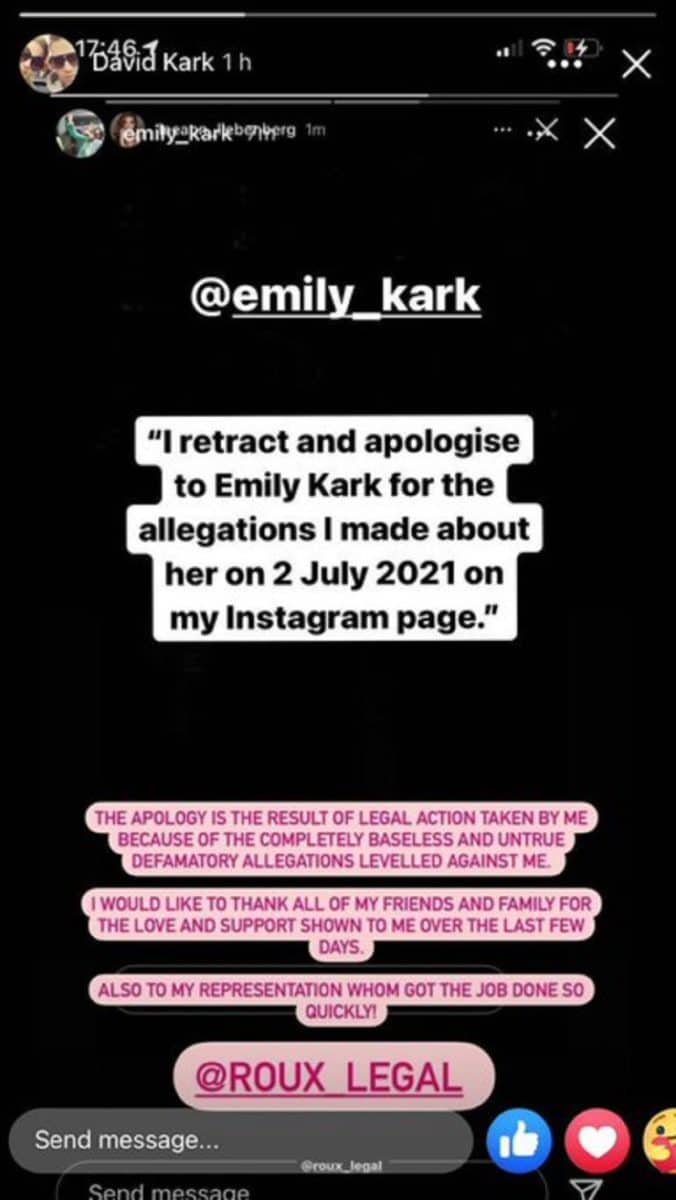 Van der Walt denied the cheating allegation his wife made publicly, claiming his wife is suffering from postpartum depression.

“In response to my wife’s post. I love her and my children dearly and with all my heart. We are not getting a divorce. Lee is suffering from deep PPD (postpartum depression) and all I can do is try be there for her for the best of my family whom I love and respect with my whole being.

“I ask everyone please to give us space to work through this and respect our family and pray for her to get better so we can put it behind us and focus on our beautiful children. Lee-Ann I love you with my heart baby @leeann_liebenberg Always and forever.”

Liebenberg and Van der Walt began dating after her split from musician Danny K and were married in 2011. They have three children together. Their youngest son, Jagger, just turned four months old.