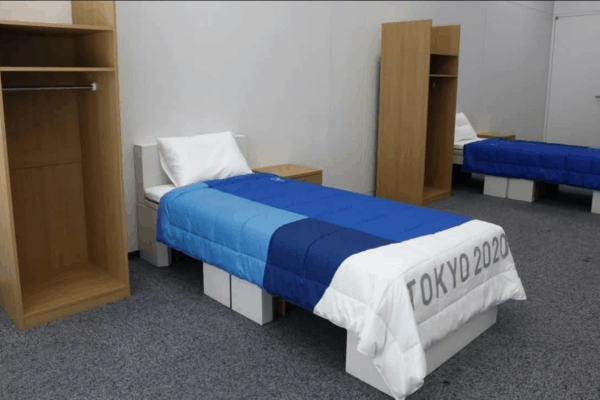 The Tokyo 2020 Olympic beds that are made out of cardboards which are supposedly suitable for both sex and saving the planet. Picture: Twitter

Irish gymnast Rhys McClenaghan has slammed claims that the “anti-sex” cardboard beds, which were allegedly designed to discourage sex between athletes during the Covid-19 pandemic at the Tokyo Olympic Games, can break easily.

In the video shared to his Twitter account, McClenaghan said that although the beds were made out of cardboard, they were perfectly sturdy as he jumped up and down on his own bed.

“In today’s episode of fake news at the Olympic Games, the beds are meant to be anti-sex: They’re made out of cardboard, yes, but apparently they’re meant to break at any sudden movements. It’s fake, fake news,” he said.

McClenaghan’s post comes after American distance runner Paul Chelimo, shared snaps of the cardboard bed frames on Twitter which he captioned: “Beds to be installed in Tokyo Olympic Village will be made of cardboard, this is aimed at avoiding intimacy among athletes.”

“Beds will be able to withstand the weight of a single person to avoid situations beyond sports. I see no problem for distance runners, even 4 of us can do,” he added.

Chelimo went on to joke that athletes would need to be careful if they wet the cardboard bed, otherwise they would end up sleeping on the floor.

“Once the carton box is wet the bed falls over especially it will suck if its a night before finals,” he tweeted.

“At this point I will have to start practicing how to sleep on the floor; cause If my bed collapses and I have no training on sleeping on the floor I’m done. More added stress heading into Tokyo.”

Meanwhile, according to US skateboarder Nyjah Huston, who is representing the United States in the upcoming Olympic Games in Tokyo, the infamous anti-sex cardboard beds were rather “hard” and “uncomfortable.”

In a video on his Instagram story, Huston said rumours about the bed being anti-sex aren’t the issue; “The only problem I see is that me and the boys got a hard, uncomfortable bed to sleep on,” he said.

“We need good sleep and me and the homies here, we’re not worried about hooking up with chicks. We’re at the f***ing Olympics to focus and beast up. That’s what we’re here for.”

The Olympic Village, which accommodates all the athletes competing in the games, will have 18,000 beds with frames made completely of cardboard.

According to Athletes Village general manager Takashi Kitajima, the beds align with the Tokyo 2020 Games’ sustainability concept of, “Be better, together – For the planet and the people.”

“Our intent and goal is not for athletes to use the condoms at the Olympic Village, but to help with awareness by taking them back to their own countries,” the Tokyo Olympics Organizing Committee said in a statement.

She also said the cardboard bed frames were stronger than people thought and they could actually stand up to 200 kilograms, which is around 440 pounds, however, they are also almost 6 feet, which makes up to 11 inches long.

“They are stronger than wooden beds,” Kitajima added. “Not only should the beds be suitable for the heaviest athletes, but also the tallest.”

Although the beds have caused a stir on social media, some users were impressed and said they were far more impressive than people have perhaps realised because for the first time in Olympic history, athletes’ beds were made almost entirely out of renewable materials.