Jussie Smollet told police in January 2019 that he was attacked in the middle of the night by two masked men while walking near his home. 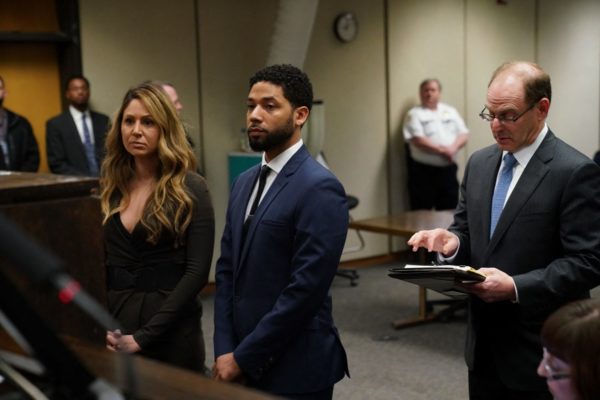 Jussie Smollet appears at a hearing for judge assignment with his attorney Tina Glandian,(L) at Leighton Criminal Court Building, on March 14, 2019 in in Chicago, Illinois. | Picture: E. Jason Wambsgans-Pool/Getty Images via AFP

A jury in Chicago on Thursday found US actor Jussie Smollett guilty of five felony counts of disorderly conduct for falsely telling police he was the victim of a racist and homophobic hate crime in 2019 — an attack prosecutors said he himself staged.

Jussie, who was one of the stars of the popular television drama “Empire” at the time, told police in January 2019 that he was attacked in the middle of the night by two masked men while walking near his Chicago home.

But investigators eventually concluded — based on examination of closed-circuit television images and the cell phone data of Smollett and his two alleged attackers — that he had orchestrated the whole thing.

“The jury in the case of Jussie Smollett have found Mr Smollett guilty of five of six counts of disorderly conduct,” Cook County Circuit Court spokeswoman Mary Wisniewski said in a statement to reporters.

Jussie faces up to three years in prison, but could instead be sentenced to probation and community service. No sentencing date was set.

Jussie’s lawyer Nenye Uche said the actor would appeal the conviction, according to US media.

“The verdict is inconsistent,” he said, referring to Smollett’s conviction on five charges and acquittal on a sixth.

“We feel 100 percent confident that this case will be won on appeal,” Uche told reporters during a press conference after the verdict.

Jussie, who is gay and African-American, maintained his innocence in the face of a damning public account from authorities of their case against him and pleaded not guilty on all counts.

RELATED: Jussie Smollett accused of staging attack on himself

Prosecutors accused Jussie of hiring two acquaintances, brothers Olabinjo and Abimbola Osundairo, to stage the attack while invoking Donald Trump’s “Make America Great Again” slogan, after the actor had received a legitimate piece of hate mail which he felt was not taken seriously by his employers.

The case took a strange turn when Cook County prosecutors dropped the initial 16 felony counts against him in March 2019.

But he was again indicted in February 2020 by a grand jury in Cook County, which handles crimes in Chicago, on six counts of disorderly conduct related to the alleged false reporting.

Jussie — who was dropped from “Empire” after the allegations against him — was acquitted on a sixth count.

‘I was supposed to punch him’

“There was no hoax,” the 39-year-old Jussie insisted during the trial, local media reported. He denied having spoken about a staged attack at any time with his alleged accomplices.

Jussie and his lawyer then acted out the fight between the actor and the brothers in front of the court, with Jussie playing the role of the attacker.

The Osundairo brothers testified they had been paid to stage the assault.

Abimbola Osundairo said Jussie “talked about how the studio was not taking… hate mail seriously.”

“Then he proceeded to tell me he wanted me to beat him up,” he said. “I was supposed to punch him but not too hard.”

The brothers had flown to Nigeria, where they are from, after the alleged attack. They were arrested upon their return to Chicago in mid-February.

The episode initially sparked outrage, with many politicians and celebrities jumping to Jussie’s defense.

The case also revived America’s long-simmering debate about how just the country’s criminal justice system really is, whether the rich get off easy — and whether prosecutors should have so much discretion.