Hundreds of traditional Mbaqanga music lovers are expected to converge in Hammersdale outside Pinetown to pay their last respects to the lead singer of legendary tradition music group – The Soul Brothers, David Masondo, at a memorial service scheduled to be held on Thursday afternoon 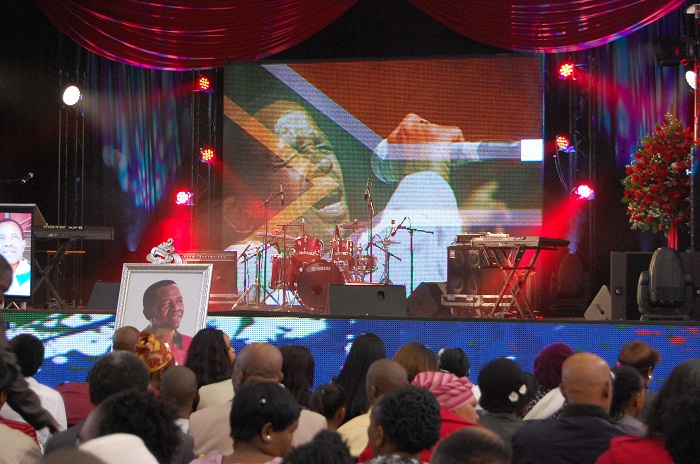 A set up with David Masondo's photos at his memorial service held at the Elangeni college in Hammarsdale, west of Durban, on 09 July 2015 . Picture: Phumlani Thabethe

Masondo, whose body arrived in Durban on Tuesday, died in a Johannesburg hospital on Sunday after complaining about exhaustion.

Bhodloza Nzimande, the spokesperson of the music group, said hundreds of people from across the KwaZulu-Natal province are expected to attend the service that will start at about 14H00 on Thursday at the Elangeni FET College in Hammersdale.

Masondo, 67, who started his career doing gigs around the townships of Durban in the 1970s, died in the Garden City Hospital – where he had been admitted after complaining of exhaustion.

In 1974, Masondo co-founded The Soul Brothers – a group that went on to become a household name within the African continent.

Considered a pioneer in the Zulu soul music genre, the group went on to release more than 30 albums and sold millions of copies throughout the entire African continent.

“He was a talented musician who represented the people of KwaZulu-Natal very well at the international stage,” Mbuso Mazibuko, a fan who came all the way from Empangeni to hour the legendary musician, said.

Thulane Mdlalose, 23, a young and upcoming Mbaqanga musician from Ndwendwe, north of Durban, said it was Masondo’s music that ignited a passion for music in him.

“My father used to play his music a lot and as I grew up I began to enjoy the music. I’m hoping that one day I will become as successful as he was,” he said.

As mourners continued gathering in the hall where the service was being held, one of the group’s greatest hit track, Mama ka Sibongile, reverberated throughout the hall, sending mourners to a frenzy.

By not dying a pauper, David Masondo managed to bring back the pride of artists – many of whom had died in poverty, the union representing musicians said on Thursday.

Speaking during the legendary singer’s memorial service in Hammersdale, near Pinetown, Joy Mbewana, from the Creative Workers Union of SA (CWUSA) said the union was proud of the way Masondo had handled his finances.

“He brought back our dignity and dispelled the perceptions that musicians were irresponsible people who misused their money,” she said.

“He was a shining example of how responsible musicians should live.”

Dumezweni Mcoyi, a neighbour and friend of Masondo told mourners that Masondo looked after all his twenty children.

“He made it a point that the needs of each and every child was well taken care of – that is why most of them are here today,” he said.

“He respected everyone irrespective of age, gender or social status,” he said.

Masondo, described as a legend, hero and icon by his fans, is survived by 20 children.