Is Dr Tumi the one to replace Somizi on ‘Idols SA’?

With Somizi's participation on 'Idols SA' unlikely for the rest of season 16, the topic of replacements has become inevitable. 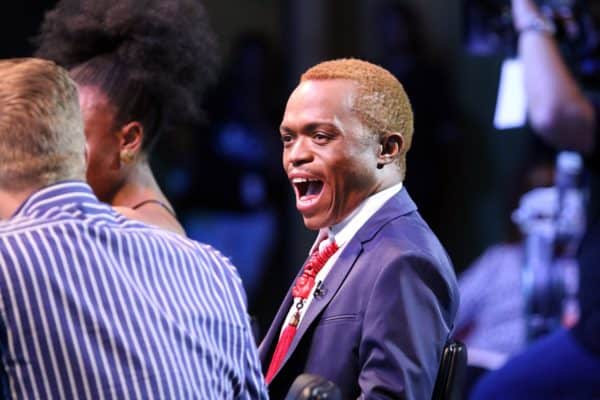 M-Net and 'Idols SA' judge Somizi Mhlongo parted ways for him to deal with his personal issues. Picture: Twitter @IdolsSA

Idols SA is presumably on the lookout for a new judge.

After parting ways with Somizi Mhlongo to allow him to deal with his personal life, his seat is now empty.

This after his estranged husband Mohale Motaung accused him of psychical abuse during their marriage, claims Somizi denies.

With his participation on Idols SA unlikely for the rest of season 16, the topic of replacements has become inevitable.

Who could replace Somizi on ‘Idols SA‘?

Popular gospel singer Dr Tumi just seems like the right fit next to Randall Abrahams and Unathi Nkayi. He appeared on season 15 and was lauded as the “best judge” the talent show ever had.

However, the star is currently embroiled in a fraud case.

In April 2020, Dr Tumi and his wife Kgaogelo Sara Makweya were arrested and charged for allegedly defrauding the National Lotteries Board (NLB) of R1.5 million.

They were released on bail and the case is ongoing. If it wasn’t for this predicament, Dr Tumi could have been top of the list for viewers.

The vibrant performer and Tsonga rapper is well-loved not only in South African music spaces but across the world.

Due to this, Sho Madjozi could help fill the void of excitement and energy that Somizi once occupied.

Sho Madjozi’s involvement in global initiatives with charity organisations, her outspokenness against injustices and international hit songs make her the full package as an Idols SA judge.

The radio host is no stranger on a judging panel, she has appeared on Idols and Miss South Africa finales a couple of times.

Her straightforward and honest assessment has won praise from some quarters but others may think she’s too harsh.

Her longevity and vast knowledge of pop culture may come in handy when advising contestants on what to do after the show ends.

Being part of the judging panel of Miss SA 2014, winner Rolene Strauss went on to win Miss World. Similar to when she judged Miss SA 2019, Zozibini Tunzi took the Miss Universe crown. The media personality can spot potential.

The Afrikaans pop singer would be a great bridge for the Idols SA audience.

The Afrikaans music genre is nowhere near the radar on the show. Having experience in TV, presenting on numerous Afrikaans shows and as a judge on the first season of The Voice South Africa, Bobby could be that voice on Idols SA.

His second album, Net Vir Jou, was released in 2009 and went platinum after selling 83,000 units in eight weeks.

Bobby is easy on the eyes, too.

Winning Idols SA in 2013, Mthethwa is well aware of what the contestants go through each season and he has had a consistent career ever since.

The multi-award-winning gospel singer is currently hosting the Clash of the Choirs on Mzansi Magic and Gospel Avenue on SABC1.

Wearing many hats, including being as pastor at Oasis Church, Mthethwa may just need to fit in time for Idols SA.

There is no doubt that The Voice of Africa singer Kelly Khumalo is a powerhouse when it comes to performing.

Her album ranked at the top for most of 2020, with singles such as Empini certified gold. Esiphambaweni featuring Hlengiwe Mhlaba was the number one gospel song in South Africa.

Musically, her supporters would say she deserves a chance on Idols SA’s judging panel but her personal life may halt this. The unsolved murder case of Senzo Meyiwa and her alleged involvement still lingers in many minds.

Seven years later, Khumalo still struggles to shake off any claims against her name in the case.

But one fan is convinced the show should consider her.