He could saddle a 1-2 in Race 7 with Al Fahad and Raasmaal. 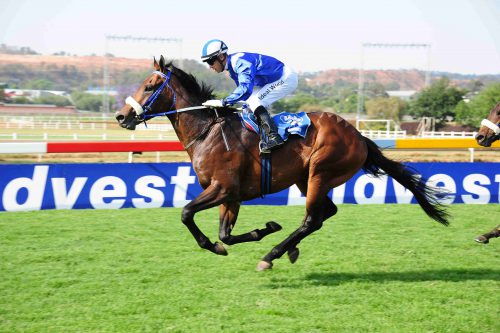 COMEBACK. Al Fahad looks well above average and is expected to win Race 7 at Turffontein tonight, despite coming back from a lengthy layoff.

Trainer Mike de Kock has saddled 13 winners already this month and could add at least three more to his tally at Turffontein today, when night racing resumes at the Johannesburg racecourse.

De Kock has seven horses carded and not one is without a chance – watch the betting on R2.3-million first-timer Pietro Mascagni, who makes his debut in Race 3 over 1160m.

De Kock’s runners Mable Syrup, Tremendous and Raasmaal have outstanding chances of featuring prominently in Races 2, 4 and 7 respectively. Raasmaal, however, might have to play second fiddle to his stablemate Al Fahad in the 1400m MR 94 Handicap.

Al Fahad won his first two starts, including beating reopposing Doosra in his 1200m debut. He is better off at the weights with Johan Janse van Vuuren’s charge.

The run that makes it hard to look past him, though, is his third career run, in the Selangor Cup over 1600m at Kenilworth nearly a year ago. Al Fahad was handy throughout and only outclassed late to finish fifth. The horses ahead of him that day were Gold Standard, who went on to place in two Grade 1 races, subsequent Cape Derby and Daily News 2000 winner Edict Of Nantes, recent Matchem Stakes runner-up Table Bay and A New Dawn.

Al Fahad’s two starts after that were not quite up to that standard, but De Kock put him away after the Tony Ruffel Stakes in February, having him gelded shortly afterwards.

He has his first run back and if he has retained anywhere near the level of ability he showed early in his career, should have little trouble disposing of this field.

Raasmaal looks the right one to pick up the pieces if Al Fahad proves to be in need of the run. He has finished in the money in six of his seven starts to date, including the Gold Rush Sprint. He showed he gets an extended sprint trip when second to Zouaves over 1450m on the Inside track last time and will make his presence felt.

It might pay to double float the De Kock coupling in Trifectas and Quartets with Doosra, Jubilee Line, Dan The Lad and Morpheus.

Lightly weighted filly Alileo failed to feature last time, but her form before that was excellent and she could make amends in Race 6 over 1160m. This De Kock-trained filly won her first two starts, form that has been franked, before being rested for four months. She ran a promising third in her comeback and, with scope for improvement plus a 1.5kg pull at the weights, should turn the tables on Spring Wonder, who finished 1.40 lengths ahead in second place.

Another potential De Kock winner is Excalibur’s Return in Race 5 over 2000m. This filly has twice run well, most recently finishing third behind Hot Talent and reopposing Cantata Mundi in an 1800m race at the Vaal.

There was only a neck between Cantata Mundi and Excalibur’s Return and De Kock’s three-year-old charge should have little trouble turning the tables, in spite of a wide draw.

BACK TO BEST: Al Fahad, who won his first two starts, has been out of action since February but could show he is back to best by making a winning return at Turffontein tomorrow night.