Dress up for Yeni-Lensley at Kimberley

Yeni will be aboard Lensley’s Pampierstad who rates a standout bet in Race 1, a 1600m maiden contest. 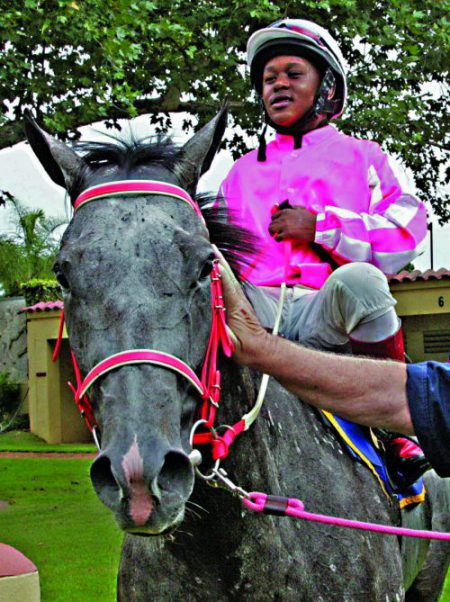 Northern Cape champion jockey Muzi Yeni, who has a strong book of rides at Flamingo Park today, looks on target to claim top honours in Race 8 a Pinnacle Stakes over 1200m when teamed up with Corrie Lensley-trained In Full Regalia.

This six-time winner – five of which were over 1200m – has shown smart form in his five runs at the venue since joining Lensley’s stable. The gelding was a runner-up over 1000m in both a Pinnacle Stakes and the Racing Association Sprint, and can be excused for his unplaced next run as he was not striding out freely.

Partnered by Yeni again, the six-year-old posted a decisive double in a 1200m MR 84 Handicap and a 1000m Pinnacle contest. With a good inside draw the combination should complete the hat-trick. His principal rivals are stablemate Pont Du Gard, Razzle My Tazzle and Modjadji.

Yeni will be aboard Lensley’s Pampierstad who rates a standout bet in Race 1, a 1600m maiden contest. This Australian-bred four-year-old has progressed markedly at the venue in his three runs since being gelded – the last of which was a close second over 1800m. Dropping back to 1600m and having secured a good draw again the combination should recoup losses.

Lensley sends out another bright prospect in Zaragoza (Yeni) who contests Race 2, a 1600m MR 69 Handicap. This three-time winner has held form well with Yeni up in five starts – winning twice and placed fourth three times. The gelding was a fluent winner in his penultimate outing over 1600m and followed up with a creditable fourth over 1800m. A suggested TAB All To Come bet which could pay well is Pampierstad with Zaragoza and In Full Regalia.