13 wins in a week for the De Kock stable

Mathew de Kock was most impressed with Dingaans runner Alshibaa in Race 5 at the Vaal on Saturday. 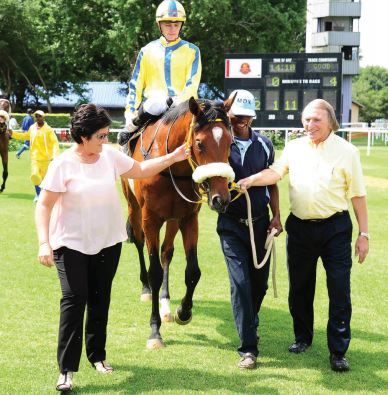 PARADE: Costa Livanos and his wife Billy Ann greet Big Parade (Callan Murray) in the No 1 box after the Dynasty colt wins Race 4 over 2000m.

The Mike de Kock stable has more than doubled its tally of winners for the season in the last 12 days and their success included four promising winners at the Vaal Classic meeting on Saturday.

Three months into the term, on 31 October, De Kock’s yard had won 25 races but they have averaged over one a day since then. At this time last year they had saddled 25 winners in total from 1 August to 12 November. Two winners on Tuesday last week were followed by another two at the Victory Moon Stakes meeting at Turffontein on Thursday – Naafer and Nother Russia. Assistant trainer Mathew de Kock said yesterday: “It was a big win for Naafer. He is a smart colt. He’ll now go for the Merchants on Summer Cup Day.”

Nother Russia holds a dual entry on Summer Cup Day – for the big one where she is high up in the betting and for the Ipi Tombe Challenge over 1600m. “We haven’t decided yet, but we’re leaning towards the Ipi Tombe Challenge because she is not 100% fit and ready for the Summer Cup,” said De Kock. Nother Russia will then be heading to Cape Town with her sights on either the L’Ormarins Queen’s Plate or the Maine Chance Farms Paddock Stakes “and then, if things go well, the Sun Met”.

If Nother Russia does not run in the Summer Cup, De Kock will still be represented by Orchid Island, who ran fourth behind Girl On The Run in the Victory Moon Stakes. Said De Kock: “I was happy with the run. She’ll improve.” Of all their winners on Saturday, De Kock was most impressed with Alshibaa.

The Street Cry gelding had no chance halfway down the straight, but suddenly rocketed forward to take over 100m out and win going away. “It was probably not the strongest of fields, but he won well. He’s in the Dingaans and drew well, so we’ll take our chances there.” Saturday’s four-timer kicked off in the first race with Dhabyaan justifying favouritism to beat King Of The Delta. In Race 3 Kremlin Judgement justified favouritism when taking over about 300m out and striding away to beat pacemaker Red Revolution.

Their 2000m Race 4 winner Big Parade “looks like he’ll be a nice stayer when he’s older and stronger”, said De Kock. “It’s nice for Costa and Billy Ann Livanos, who won the Summer Cup with Flirtation in 2010.” Dhabyaan was ridden by JP van der Merwe, while the others were all ridden by Callan Murray.