Have second thoughts about the Hyde Park Stakes at Kempton tonight. 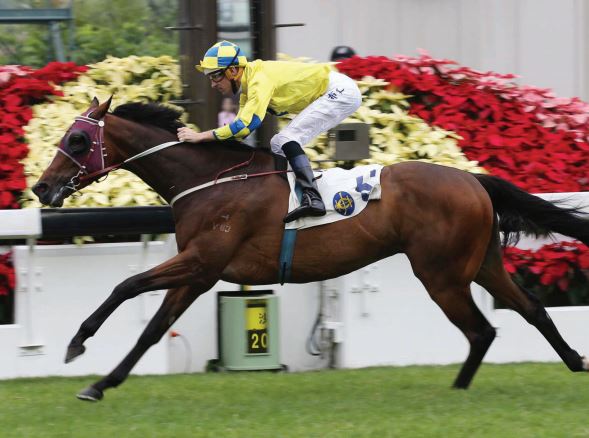 We might be approaching the pantomime season, but for any racing fan the best Christmas treat from Santa Claus would be flights and tickets for the Hong Kong International raceday at Sha Tin on 10 December.

Today the entries will be  released for the four Group 1 races which make up Hong Kong’s biggest meeting of the year. Sha Tin, which will celebrate its 40th anniversary next year, is a world-class racetrack and, as always, there will be a strong international presence, but the locals insist that they have the quality to stave off overseas challenges in one and maybe two of the major races.

Home defence is skippered by local champion Werther, who dug deep into fresh reserves of courage to win his preparatory outing over the course last Sunday. Werther, who deposed Able Friend as their Horse of the Year last season, already has victories in the Hong Kong Derby, QEII Cup and HK Gold Cup on his CV, so the HK$25-million Hong Kong Cup is all that stands between the sixyear-old completing the full house of the country’s premier 2000m races. New Zealand-bred Werther only had a neck to spare over Time Warp at the weekend, but trainer John Moore stressed “this was the dress-rehearsal” and is adamant his stable star will improve for the run.

Moore, celebrating his fifth win in the race, said: “This was only Werther’s second run of the season, and his fitness was really put to the test as Harbour Master was setting some pretty impressive fractions up front. “Our fellow wasn’t 100%, but we got away with it and remember he had he 2.5kg penalty to carry. He’ll be sharper for his big finale in the Cup.” “Werther is just where we want him and there are exciting times ahead,” declared jockey Tommy Berry, who envisages “he can improve another 10% over the next two weeks”.

However, while Werther has solid claims, the locals are traditionally hardest to beat in the Sprint – they have won the last three runnings with Aerovelocity and Peniaphobia – and with John Size sitting with a couple of aces and a few picture cards in his pack, even allowing for what looks a strong USA challenge they’ll be putting up a strong defence in the speed race. Size had four runners in the prep for the Sprint last weekend and returned with a  1-2-3-5, Mr Stunning taking the spoils when dominating the race from start to finish. The stats do not support jockey Nash Rawiller’s claim that Size can pull off the big dash with Mr Stunning – the eight-times champion trainer in Hong Kong has had 37 runners at Sha Tin’s showpiece but has mustered just the one winner, Glorious Day, who captured the Mile in 2013.

However, maybe we have found one to beat them all in Lucky Bubbles, who started favourite but beat only one home. “It was an absolute disaster,” proclaimed Zac Purton afterwards. “Everywhere I went I got blocked – we finished on the bridle and the race is best forgotten.” And remember Aerovelocity trailed in last in this race in 2014 and three weeks later he won the Group 1 Sprint, so maybe we should keep Lucky Bubbles on side.

He was only beaten a whisker by Aerovelocity last year and would have got up in one more stride.Ryan Moore, who has just begun his now regular 10-week winter stint riding in Japan, will break off to be a part of Hong Kong’s richest day. All-weather racing in Britain has come an awful long way these past few years, and with more than £1 million in prize money up for grabs at Lingfield on Good Friday (30 March) next year, we get a lot more quality horses being kept back for the Polytrack surface in the winter. You might be on the second bottle of the claret come the £40,000 Hyde Park Stakes at Kempton this evening, but I suggest you leave a few rand behind for SECOND THOUGHT in the 1600m Listed, race which is the first of four FastTrack Qualifiers for the £150,000 Mile Final at Lingfield.

Second Thought is going into unknown territory trip wise and his sire, Kodiac, is best known for producing sprinters, but William Haggas’ colt, who is 4-4 on the allweather, has looked recently as if he was crying out for a step up in distance. James Doyle will have to keep his powder dry for a late thrust, but Second Thought is well drawn. And if the cards fall his way his finishing kick could prove decisive. Stormy Antarctic, winner of the Group 3 Craven Stakes at Newmarket last year, has the class, but he has a penalty, a poor draw and is unproven on this surface. So Beloved, runner-up in the Group 1 Prix de la Foret at Chantilly on Arc Day, is the top-rated horse in the race.

But all his best form has been at 1400m, while Accidental Agent, who has climbed 12kg up the ratings through the summer, might find this a bridge too far. I have a lot of respect for Irish raider Glastonbury Song, fourth to Churchill in last season’s Irish 2000 Guineas and 2-2 on the Polytrack at Dundalk, but he is another drawn in the cheap seats. There is also some good allweather action at Lingfield on Saturday, and I like the chance of Hugo Palmer’s GULLIVER in the 1400m conditions race. Runner-up at Ascot in September, Gulliver has thrived for the switch to synthetics, winning three off the spin and improving 7kg, so it is no surprise that the vibes from Newmarket are encouraging.