However, he says Brazuca has been working the best in the last fortnight. 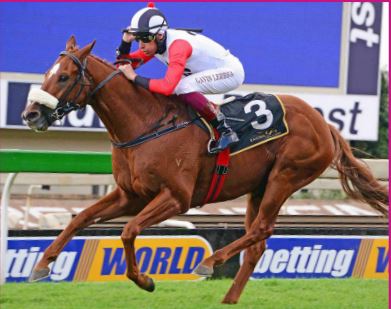 TRAINER'S CHOICE. Brazuca might be a difficult customer in a race, but trainer Johan Janse van Vuuren likes him best of his four runners in the Gauteng Sansui Summer Cup.

A win on only his second attempt in the R2-million Gauteng Sansui Summer Cup would be a dream come true for young trainer Johan Janse van Vuuren, who sends four horses into the fray in the Grade 1 race at Turffontein tomorrow.

The 25-year-old’s arsenal is spearheaded, he believes, by Teofilo five-year-old Brazuca, a 14-1 chance in the big race. “He’s put in the best work over the last two weeks,” said Janse van Vuuren. “I’m not happy with the draw but he’s got one of the better riders in the country on him and Gavin will know what to do with him.” His rider Gavin Lerena said this week that Brazuca was not the easiest of rides because he needs everything to go his way but that “if the right Brazuca pitches up to the races, he’ll be the horse to beat”.

Brazuca drew at No 14 for the big race and just four of the last 15 Summer Cup winners drew in double digits. Crowd Pleaser, an honest and in-form son of Captain Al, is the best fancied of Janse van Vuuren’s runners. Betting World have him as second favourite at 7-1 and he certainly ticks a lot of boxes, with a good draw, a light weight, a jockey who knows him well and a hot dress rehearsal following a layoff. He does take a rise in class and Janse van Vuuren agrees “he must be a big runner with that kind of weight”.

“He’s a very good horse,” said the trainer. “He hasn’t done anything wrong. And he’s put up some good work in the last couple of weeks.” The mare Girl On The Run (16-1) won her last two starts – when she beat a few of these – and punters should note that the blinkers coming off in the official racecards was an administrative error. “She is a really good filly and has been working very well. But she was weighted to win both those races and this is a handicap, so she faces her toughest task.

“But her jockey Donovan Mansour is happy with her work and with a nice draw she’s definitely the type of horse who could run into the money.” There are some doubts about topweight New Predator’s stamina and he is on offer at 25-1. However, Janse van Vuuren said: “He seems to have lost a bit of that urgency to get on with it in his last two runs and maybe he is looking for further now. But 2000m is a question mark. Over 1800m I’d be more confident.

“I’d still rather have a horse like him, one who’s proven in this kind of company, than a couple of the other horses near the bottom of the weights.” He added: “Make no mistake, this is an extremely competitive race and this time around it will definitely be worth winning. You can make a case for at least half the field. I do think all four of mine can run into the money – they pay eight places in the Summer Cup. “Our biggest danger is Geoff Woodruff rather than any one of his horses.”

Janse van Vuuren has a number of other horses at the meeting who are high up on the betting boards, but says his best on the day is probably Square The Circle (even-money favourite) in Race 2. This Royal Air Force gelding has run two races to date and failed by just a whisker against highly regarded Pietero Mascagni last time out. A BiPot banker? Janse van Vuuren says, “Yes.” In Race 10 he has two runners, Doosra and Irish Pride. “I can’t split them at home, they’re both working exceptionally well.

Don’t leave them out of anything,” he urged. Arguably his next strongest race is the Merchants over 1160m in which he fields The Thinker, who is out at the weights on merit ratings. “He was unlucky in his last start (when a close fifth behind reopposing Graduation Day in the Golden Loom Handicap) and would have got a penalty if he’d won. A three-point penalty puts him bang in there and I’ll be disappointed if he runs out the money. In fact, I won’t be surprised to see him win.”

He saddles Kilauea in the Magnolia Handicap, the first feature on the card. “She’s very talented,” he said. “The 1160m is a touch on the sharp side, but she oozes class and she’s going to be running at them in the race. We’ve added blinkers because she’s going back in trip and they should sharpen her up a bit.” Most punters won’t look past Nother Russia in the Ipi Tombe Challenge with Bella Sonata a clear second choice and Janse van Vuuren agrees his talented but unsound charge She’s A Giver is running for minor money, while the other horse he believes has a money chance is Empress Valley in Race 12. “She shows a lot more at home than in the book and we’re trying her over further now in the hope that’s what she’s looking for. Don’t leave her out of anything, either.”