Hopefully the rains that fell will help soften the Highveld courses; and Pretty Penny and Afrostar look to be Pick 6 bankers at Turffontein. 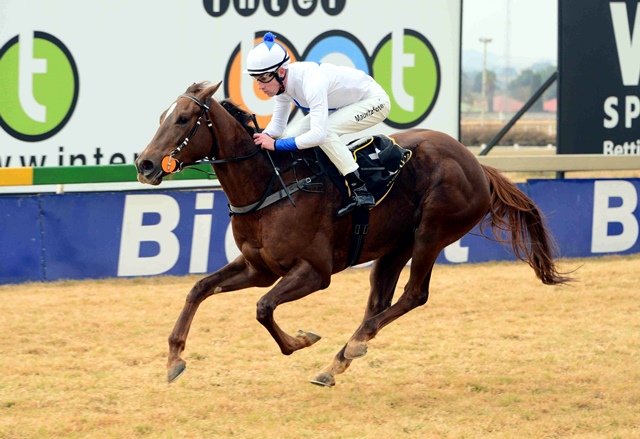 BANKER: Piere Strydom believes Afrostar who runs in Race 9 at Turffontein today, is a banker in all bets. Picture: JC Photographics

All over the world racing has to adapt to seasonal issues. Right now on the Highveld, as we move from winter into spring, the tracks are still hard but we have had strong winds that are currently playing a big part in our racing.

Often in Port Elizabeth and Cape Town, where the winds are quite severe, it definitely can affect the outcome of the race.

Therefore, when we ride we have to ride taking the wind into account and that can become quite tricky. Horses often like to race freely and if they have to race into a head wind it can affect them. If you ride a one-paced type of horse and try to tuck him in, it sometimes becomes difficult to pick him up and get him to go again. Then you find that horses from behind you have built up momentum and they just race pass you and there is nothing you can do about it.

With the tracks still hard and fast the front runners don’t stop either. While it might seem ideal to settle back and get cover, it is hard to come from off the pace when you’re riding into a strong head wind.

Fortunately we had some decent rain yesterday and hopefully that will start to soften the tracks.

Today we race on the Inside track at Turffontein and even though the wind could still be a factor with the short straight it doesn’t affect the results as much.

Race 1 is a Maiden Plate over 1450m where you start on a winning note by following Iditarod Trail. The dangers are likely to be Takatul and Captain Hook, which is the ride I tried to get, but Iditarod Trail looks hard to beat. I knew I wouldn’t get the other two so I thought my next best option was Captain Hook.

Race 2 is another Maiden Plate but this time for work riders. Abelie is my first choice. She has the best form and the support of Sam Mosia who is one of the most experienced riders in the series. The danger could be Huddle.

I was never able to make the weights. The weights were raised later but by then the ride was already taken.

Race 4 is the Ladies Stakes and Pretty Penny looks hard to beat. She has the form and is drawn No 1 on a track where the draw is vital. The only threat could be Schippers but Pretty Penny is talented and I’m making her a banker in all bets.

Race 5 is a handicap and my first choice is Bronx Bomber. He is the first call I made for a ride. He was well beaten last time but he is quite a nice looking horse and has room for improvement.

His danger must be Wonderous Climber who is drawn No 1 where in the past he has had shocking draws and was unable to have the run of the race. Others with chances must be Kurt’s Approval, Seventh Of June and Decision Time.

I’m riding Play The Night who apparently can overrace and the extra distance is not in his favour.

The race is open so for the PA put in Bronx Bomber, Wonderous Climber and Kurt’s Approval and for the Pick 6 as many as you can afford.

Race 6 is another handicap where On The Double shows strong form. She has just turned three and now is taking on horses like London Secret who has run in features. The others with chances are Return To Power and Only To Win.

For the PA go with On The Double, London Secret and Return To Power because last time when I rode her she did not jump well and never got into the race so she could improve. I ride Barbie Doll who is going up in class but she is not without a chance. For the Pick 6 go with all mentioned and more if you can afford.

Race 7 is the Spring Spree Stakes and Chimichuri Run looks hard to beat on form. He also has a good draw over this 1200m which on the Inside track is vital. My concern is that he has just turned three and is only getting 4kg from a horse like Talktothestars who is a Grade 1 winner.

If that concerns you consider Splendid Garden, Premier Show and possibly Talktothestars if he produces his best. A lot of runners will be affected by a wide draw and I ride one of them in Angel’s Power. He does go well for me and I enjoy riding him but my first choice would have been Splendid Garden because of his form and the fact he has a good draw.

I just want to point out that just because I phoned for another ride and didn’t get it, obviously I still get my horse to perform as best as possible so when the conditions do suit him I can keep the ride.

For the PA put in Splendid Garden with Chimichuri Run while for the Pick 6 add in Talkstothestars. If you look beyond that you can stick in anything else.

Race 8 is another handicap with the two main runners being Shukamisa and Puget Sound. Shukamisa is drawn No 1 and has a 2.5kg claimer up so he has to be a PA banker. For the Pick 6 add Puget Sound and Zouaves.

I’m riding Cash Time who obviously has bigger plans and he could find this distance too short. Hopefully he runs well enough to be prominent in feature races this season.

Race 9 is another handicap but you could have another banker in Afrostar. She won her only start and it was over this course and distance, which is in her favour. Banker her in all bets.

The horses to chase her home are Some Song and Ladies Club.

I ride Goodness Me who has only one thing in her favour and that’s the draw.

Race 10 is a plate race and therefore your highest rated horses should come out on top. My selections are Arte, Parisienne Chic, War Legend and King Of Chaos.

Race 11 is another handicap with my first selection being Savannah King. He ran a good race last time after having been gelded and should be fit for this occasion. His dangers are Wildlife Safari and O Lucky Man who has the benefit of draw No 1.