Netherby Hall set for another win

The seven-time winner takes on stronger opposition this time but with a handy galloping weight of 56.5kg the gelding should be up to the task again. 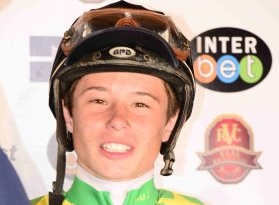 Seasoned campaigner Netherby Hall, out of Stephanie Miller’s stable, has a fine association with jockey Ryan Munger and the combination has a bright chance to notch up another win at Flamingo Park today when lining up in Race 5, a Pinnacle Stakes over 1800m.

In 13 outings with Munger aboard, this seven-year-old has been unplaced only twice, with a tally of five wins – the last of which was in his most recent run when he scored impressively under 60kg by 7.75 lengths over 2200m in a MR 72 Handicap.

The seven-time winner takes on stronger opposition this time but with a handy galloping weight of 56.5kg the gelding should be up to the task again.

Yeni partnered this seven-year-old only once and that was in his penultimate outing when he went off favourite and came from last a er a slow start to snatch victory in a 1800m Pinnacle Stakes.

The gelding had Nicholas Patel aboard in an indifferent subsequent outing when failing to re-cover from a bad start and finishing well down the field.

That run is best overlooked and he should be in the final call this time.

Also in with claims is Jare Rugg-trained four-time winner Assisted Take Off (Jarryd Penny) who comes off three good runs.

This three-year-old was a gutsy winner over 2200m with Patel up, then stepping up in class and rid-den by Penny he was a runner-up to Netherby Hall over the same distance.

The combination made no mistake next time with a re-sounding win over 1800m.