Mike de Kock has nominated all four of his top three-year-old colts in Soqrat, Hawwaam, Barahin and Alyaasaat, as well as Noble Secret and Cascapedia. 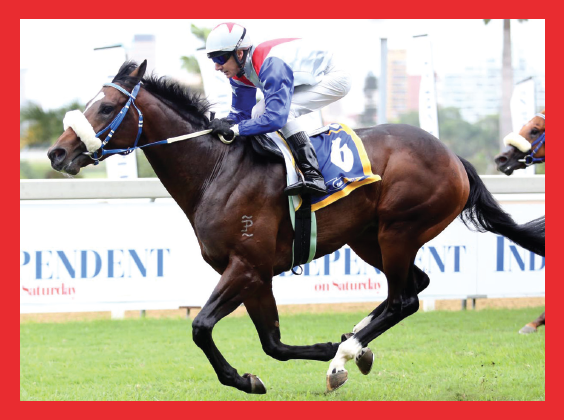 HAT TRICK. Trojan Harbour has found a winning groove and could reel off his third success in a row in the Golden Horseshoe tomorrow at Greyville.

Should all the horses nominated for the R4-million Premier’s Champions Challenge over 2000m at Turffontein on Saturday 4 May accept to run, this will be the best line-up seen for years.

Mike de Kock has nominated all four of his top three-year-old colts in Soqrat, Hawwaam, Barahin and Alyaasaat, as well as Noble Secret and Cascapedia.

In addition, cham-pion trainer Justin Snaith has submitted Vodacom Durban July runner-up Made To Conquer while Gary Alexander has put last year’s SA Derby winner, Hero’s Honour, into the field. Add to that an SA Oaks winner in Secret Potion, who is one of three entries from the Geoff Woodruff yard, the others being Al Danza and Owlinthetree.

Hawwaam’s spectacular win in last Saturday’s Grade 1 SA Classic would make him a major attraction in this race and it would not be a bad option for De Kock as this is a weight-for-age event.

In an interview with Turf Talk De Kock, who is in Australia, said Hawwaam’s immediate future is up for discussion with the colt’s owner, Sheikh Hamdan, and he commented: “I’m not convinced we’ll go for the Derby. I have great respect for the Derby, it has a history of being won by some super horses, but I’m not sure it will do anything for his pedigree.

“I see Hawwaam running only once more, perhaps twice, this season. The Grade 1 Daily News is a possibility and the Grade 1 Champions Cup at the end of the season, winning any of the two will be good for his pedigree. “The Durban July is not on the cards.“

I know what we’ve got in Hawwaam and I still scratch my head at his defeat in the Gauteng Guineas, a race we expected him to win.

“But sometimes blessings come in disguise. If Hawwaam had won the Guineas we would have been tempted to go for the Triple Crown and as I said, I have a feeling the Derby is the wrong race for him and won’t add value to his pedigree.

“I have to be very mindful of the fact that I’m dealing with a very valuable commodity. I have to think of everything in terms of his pedigree, his future value at stud. But we do have a lot to con-sider before we map things out.”

The draws have already been made and perhaps the fact Hawwaam has landed No 14 draw could affect De Kock’s decision.

Tarry, speaking about Return Flight, said he had also not decided where to go with her but the SA Oaks and this Champions Challenge were definite options.

This race looks a very strong option for Hero’s Honour who already has the benefit of No 2 draw.

He has contested three Assessment Plates since his re-turn, fi nishing fourth in his fi rst and winning the next two. In his last run he actually beat Return Flight over 1600m.

Second entries close at 11am on Tuesday 26 March, third entries at 9am on Friday 26 April with Declarations close at 11am on Monday 29 April.Entries for the R4-million Premier’s Champions Challenge (Grade 1) over 2000m at Turffontein on Saturday 4 May.