She will be ridden by S’manga Khumalo who has won twice on her. 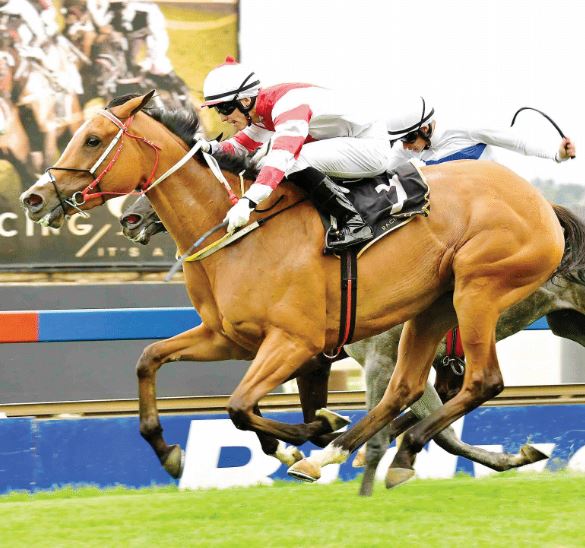 FAMILY TIES. Sidonie could keep up her broodmare’s proud record in Race 3, a Graduation Plate at the Turff on- tein Standside track tomorrow. Picture: JC Photographic

Sean Tarry has had a lot of success with horses out of the broodmare Bardot. Bichette and Pilou are by Western Winter, and Warrior’s Rest is by What A Winter.

All three have won multiple races and have done well for their respective owners. The youngest of the lot who have run is three-year-old Sidonie, who is by Dynasty.

There is also a two-year-old colt by Visionaire called Dark Vision and we will be keen to keep an eye out for him when he has his first run. Sidonie won her maiden on debut by an impressive 9.25 lengths and after that raced in three consecutive features.

Her best finish was a 2.25-length fourth behind Summer Pudding in the Grade 3 Fillies Mile but her “worst” performance was a 3.75-length sixth behind Mill Queen in the Grade 3 Starling Stakes, which hardly can be called a bad run. One got the impression she was still learning to race but there is no shortage of talent.

Sidonie backed that up in her next start over 1600m on the Turffontein Standside track where she led all the way to beat Indy Go by 0.40 lengths in a Graduation Plate.

She contests another Graduation Plate over the course and distance in Race 3 tomorrow and on this occasion, she is handicapped to run out an easy winner.

Sidonie is at least 2kg better weighted than any of her opposition and is expected to win with authority. She will be ridden by newly qualified jockey Denis Schwarz who was aboard on her last start.

One runner who could be better than her merit rating suggests is Christmas Flower from the Alec Laird yard. She has run three times and after a moderate debut run over 1160m, has won twice over 1600m. This three-year-old daughter of Flower Alley has a tendency to lose ground at the start but is capable of producing a strong finish to get her home.

She will be ridden by S’manga Khumalo who has won twice on her. Another to consider is Secret Dream who is the second best-weighted runner. She has been a consistent place-getter but on paper, she looks to be held by Christ- mas Flower, who beat her quite easily.

However, Secret Dream was reported to have choked up in running so one needs to put a line through that run.

Lucky Houdalakis trains this daughter of Elusive Fort and she will be ridden by Marco van Rensburg.