Alexander’s Charity Mile runner is Champagne Haze who will be running on behalf of the Fortune Kunene Primary After-Care. 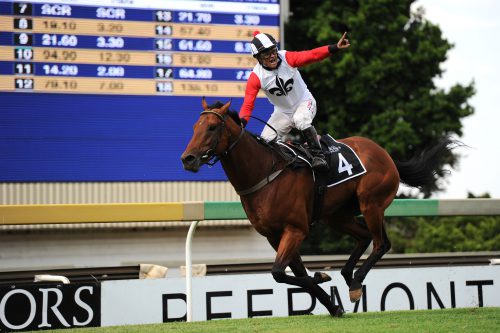 Gary Alexander, who turns 57 on Thursday, is hoping to win the Peermont Emperors Palace Charity Mile (Grade 2) for the third time in his career when the race is run at Turffontein today.

Champagne Haze will be running on behalf of the Fortune Kunene Primary After-Care Centre in Vosloorus, which provides orphaned and disadvantaged pupils with wholesome meals, school uniforms and help with homework.

He will be publicly represented by SABC3 presenter Zoe Brown and has 48 Hours as his media partner. The four-year-old gelding is the 6/1 third favourite with Betting World and will have many supporters, especially because some horses often come to form at the same time every year.

A year ago at the same race meeting, he beat Charity Mile favourite Rabada. His good form since includes a second to Triple Crown winner Abashiri in the Gauteng Guineas on this course in February.

Alexander is hoping Champagne Haze can follow in the footsteps of Pierre Jourdan, winner of the Charity Mile in 2011 and Kick The Habit, who beat stablemate Naval Guest in 1991, nine years after he officially became a trainer.

Alexander, who is married to Danica with children, Sasha and Johnmarc, has horseracing in his blood as the middle son of champion jockey Duncan Alexander.

His sister Julie is well known to Tellytrack (DStv channel 239) viewers as a presenter, while older brother Stuart, like their uncle Greg Sadie, is in retail. Gary’s younger brother, Dean, is his business partner.

When Duncan retired from riding in the 1970s, Alexander left school to work for him, saying: “I always knew that I would be a trainer and aged 16 decided that passing matric wouldn’t help me to have winners.”

“It took a while to persuade my parents to allow me to leave school, but in 1975 I joined the yard as a groom – not even a work rider because Dad wouldn’t allow any of us to ride; he said it was too dangerous.I earned R50 a month.”

Two years later, when Duncan suffered a stroke, Alexander – then only 18 – took over the string. He was considered too young to be licensed so their 12 horses still raced under Duncan’s name until 1982.

Not long after he pinned on his trainer’s badge, Alexander won his first race with Northumberland. Two other horses in his small yard, Haka Hana, who raced in his gold-and-black silks, and Wallah were the stable stars in those days, collectively winning about 14 races.

Alexander – who is not afraid to try new tools if his research indicates they might help him do his job better – has trained many top horses, including classy stayer Mosszao and lightning-fast sprinters Tommy Hotspur and Ruby Clipper, as well as Drum Star and Brutal Force.

Memorable days include having six winners at Turffontein in 1995 and again in 1996, as well as three feature race wins at the inaugural Champions Day in 2000 – Drum Star won the Champion Stakes, Silver Sliver won the SA Derby and Lady Of The Turf won the Gold Bowl.

Alexander went through some lean times in the nineties, but his brand was made famous again by “ugly duckling” Pierre Jourdan, a nine-time winner who became a household name from 2009 to 2011.

The Charity Mile is one of the most popular events on the Johannesburg racing calendar because each of the 16 runners races on behalf of a charity.

The race was introduced in 2006 in a lowly MR 65 Handicap at Turffontein, but later that year was attached to what was then known as the November Handicap, a race with a proud history that traces back to 1963.

The Charity Mile is a normal race in every sense but it yields a R1 million windfall for 16 charities, with the amount each charity collects depending on the finishing position of their horse.

No charity goes home empty-handed and the charities represented by the fifth to 16th-placed finishers each receive R50 000 and to add hype and glamour, each horse is publicly represented by a celebrity and has a media partner.